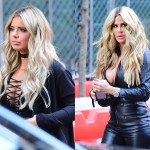 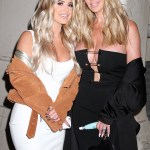 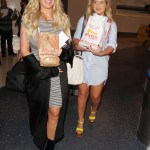 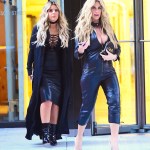 Kim Zolciak shut down a social media troll in her latest Instagram video with daughters Brielle & Ariana after they claimed the three of them had fake teeth.

Don’t mess with us! Kim Zolciak, 42, had the time when a hater took a jab at her, Brielle & Ariana‘s appearance on Wednesday, August 26. The former RHOA star posted an Instagram video of them revealing exciting news about their upcoming appearance on HSN in September. Each of them looked absolutely dazzling where the sisters stunned in their beautiful brunette locks while mommy Kim showed off her flawless blonde ‘do. Not everyone was impressed however, as one in particular claimed they all had their teeth done which in turn has given them a “lisp” when they talk.

So excited!! We will be LIVE on @hsn Sept 16th can’t wait 😉 Stay tuned 💕 @briellebiermann @arianabiermann

Not so fast! Kim shot right back at the and said point blank, “Umm nobody has fake teeth sweets!”, while adding “God given” with two kiss emojis. Kim has become somewhat of an expert in the world of celebrity clap backs as it seems she has to do this on a consistent basis whenever the mother-of-six posts something about either herself or her family.

Take for instance the time where she denied getting plastic surgery during quarantine. “If you b**ches could only behave for, I don’t know, a week on my Instagram,” she began in an Instagram story posted on August 11.

She did something similar back in July after people accused her of photoshopping her sexy swimsuit pic. She legit had to post a video afterwards to prove that everything matches from what she shared.