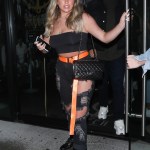 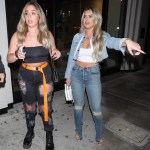 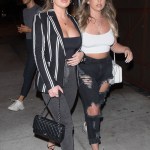 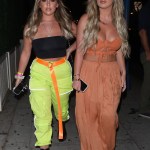 Does Ariana Biermann have a new man in her life? The ‘Don’t Be Tardy’ star got awfully close to a gorgeous hunk named Aaron Scott and said she just absolutely ‘adores’ him.

Is it time to hit the new couple alert? After failing to find long-lasting love with Collin Lipman and Hudson McLeroy, it seems that Ariana Biermann, 18, snagged herself a catch – who is a snack. She shared a picture of her snuggled up to Aaron Scott on July 20. “Adore you <3” she captioned the shot, one that showed her in a white floral-print bikini from her mother’s – Kim Zolciak Biermann – Salty K swimwear line. In a second shot, Ariana looks lovingly at Aaron, in a way that left her sister, Brielle Biermann, going “Oh wowwwww” in the comments section. Aaron also replied in the comments, writing, “And I adore you, love.”

So, who is this hunk getting close to Arianna? Judging by his Instagram, he’s a model who is not afraid of showing some skin. He’s posed for MODUS VIVENDI underwear, is represented by Good Talent Management, and claims he placed silver in “Worlds 16 – Steel” and “Worlds 17 – Cheetahs.” He also is no stranger to a gym, boasting so many abs. The best part of all? He has a brother – who looks just like him!

Ariana was involved with Collin Lipman during Season 7 of Don’t Be Tardy, but as Distractify notes, they had already broken up before the season had started airing. She had reportedly moved on to Hudson, another aspiring model, but the two seemingly broke it off around Valentine’s Day.

Ariana has practically spent the last three or four months in a bikini, soaking up rays and enjoying the warm Georgia weather. “Staring past this quarantine,” she captioned and April IG post featuring her in a black bikini, seated in a meditative pose. The following month, Adriana posed in a selection from the Salty K swimwear line while sitting cross-legged on a pink pool float. Plus, just a few days before she snuggled up against that hunky Aaron, she posed in a ruffled “Ivory Coast” style two-piece. “I try to be everything I can,” she captioned the post while adding a red-lip kiss emoji. It seems with each picture, the teenage Ariana cranks up the heat.

Ariana has been the biggest supporter of Kim’s new swim line, modeling several of the selections for her Instagram. “My happy place,” she captioned a July 14 snapshot of her in a lime green and purple bikini with a V backside. “My sweet @arianabiermann wearing @saltykswim’ SeaShore.’ I LOVE seeing in my girls in my swimsuits!” wrote Kim when she shared the picture to her page. “Funny story about this print! I fell in love immediately with the lime green and purple…both my girls were like ‘Nah that’s a hard NO.’ Well, the suits arrived, and of course, their ‘favorite suit ever’ is this print.” No word on if it’s Aaron’s favorite, but it’s safe to say he “adores” whatever bikini is on Ariana.