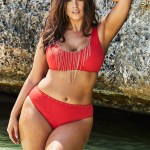 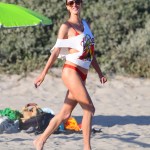 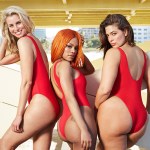 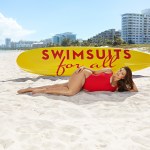 Alessandra Ambrosio cranked up the heat wearing a red hot bikini over the weekend! See the model in the ‘Baywatch’-inspired look, and more stars rocking the style!

It’s a hot one out there, and not just because of the balmy temperatures! Stunning Brazilian model Alessandra Ambrosio looked absolutely red-hot on August 9 in a burnt orange bikini that served up some major Baywatch vibes. The 39-year-old stunner looked positively striking, rocking the two-piece at a Malibu beach surrounded by close friends. Throughout the day, Alessandra rocked a pair of sunglasses and was even seen wearing red short shorts and a graphic T-shirt over her swimsuit.

The model and mother-of-two enjoyed some rest and relaxation with her squad, and got in on some volleyball action, too. At one point, Alessandra was spotted running across the sand, almost as if she was recreating iconic images from the Pamela Anderson-led series! At certain angles, Alessandra’s bikini almost looked like the bright red suit from the ’90s series.

More than just her great fashion sense, Alessandra’s fit figure was put on full display. Her legs muscles, particularly her claves, looked incredibly toned and her strong core could just be glimpsed beneath the T-shirt she was wearing. But all eyes were on her super cute bikini! And Alessandra isn’t the only star who has gotten some major inspiration from Baywatch.

Every single summer, without fail, the stars break out their very best red swimsuits. Inspired by the iconic one-piece with a scoop neck worn by Pamela Anderson, the Baywatch look is always in when the summer season sets its course. Over the years so many stars have sported the look, and Alessandra is just the latest addition!

Ashely Graham, Selena Gomez, Larsa Pippen, and more have shown off their beach bodies by working a red swimsuit that even Ms. Anderson would be proud of. Much like Alessandra, these ladies work the look with total confidence and put their own unique spin on it time and again. To see more stars wearing Baywatch-inspired red swimsuits, check out the gallery above!