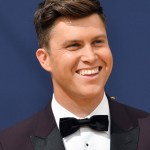 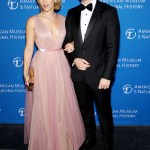 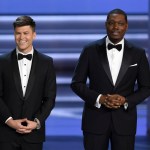 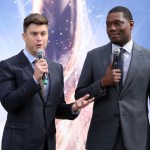 Scarlett Johansson has had many handsome on-screen lovers, like Adam Driver and Mark Ruffalo — lucky her. But does IRL fiancé Colin Jost ever get jealous of her love scenes?

When you’re engaged to one of the most famous actresses in the world, it’s bound to get complicated sometimes. Colin Jost really isn’t sweating the small things, though. The Saturday Night Live star and head writer, 38, told Howard Stern that he’s not particularly bothered by his fiancée, Scarlett Johansson, sharing on-screen romances and love scenes with her co-stars…. even if it’s someone as hot as Adam Driver.

“I don’t really think I’ve experienced yet,” Colin told Howard on the July 15 episode of The Howard Stern Show. “I think maybe five, 10 years ago it would have been devastating. If people love each other and want to be together, they’re going to be together. And you have to kind of faith in that on some level.” He joked that he was going to push Scarlett into doing “animated stuff, doing a lot of voice work” to avoid it, though.

There’s a plus to it all, though. Adam said on Saturday Night Live in January that because he played Scarlett’s husband in Marriage Story, “I basically kissed Colin Jost if you think about it!” That’s a pretty big plus for Colin, if you ask us. The comedian clearly has nothing to worry about, as he said. Scarlett is head over heels for her fiancé.

The Black Widow star revealed to Parade Magazine in April what attracted her to Colin, whom she met for the first time while hosting SNL in 2010. “What you see is what you get with him,” Scarlett told the mag. “He’s very optimistic, easygoing, funny, nice, and those are the qualities that really drew me to him.” The couple began dating in 2017, and two years later, Colin popped the question!