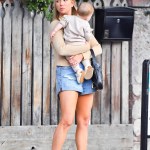 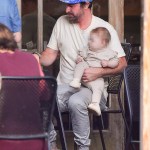 Stassi Schroeder took to Instagram to share a casual yet stunning photo of herself standing in a mirror and revealing her bare growing baby bump while making a joke about her behind.

Stassi Schroeder, 32, proved she’s still got a sense of humor despite all the controversy she’s been through recently when wrote a joke in the caption for a new social media photo that showed off her bare baby bump for the first time. The mother-to-be was standing in a mirror while holding up her phone in the selfie and lifted up a black sweatshirt to reveal her small yet growing bump. She also wore cute pink and black shorts and gray socks in the pic.

“Now if I could only gain this in my bum,” she joked in the caption while also adding a pink heart emoji.

Stassi’s latest post comes just a few weeks after she shared the news that the baby-to-be, whose father is Beau Clark, is a girl. She posted a cute photo of her and Beau posing with a pink onesie that had “#OOTD” written on it on June 23 and captioned it with the amazing announcement. “We’re having a baby girl,” it read.

Although her June 9 firing from Vanderpump Rules, due to previously making racially insensitive comments, led to a lot of controversy over the past month, Stassi hasn’t been shy about publicly enjoying the next phase of her life and seems genuinely excited to become a mother. She was spotted showing off her bump while wearing a black mini dress during an outing in West Hollywood on July 14 and did the same during her 32nd birthday celebration.

Stassi’s pregnancy was first reported on June 13, just four days after she and some other VP co-stars like Kristen Doute, 37, were let go from the show. She was seen with Kristen and Katie Maloney, 33, during a lunch outing at The Grove in Los Angeles on July 8, proving the two haven’t stopped being friends despite no longer being co-stars.

Stassi made her Instagram page private shortly after the firing but has continued to post pics of her pregnancy journey for her accepted followers. We’ll be on the lookout to see what else she decides to share!