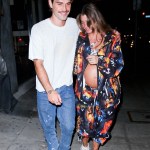 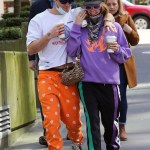 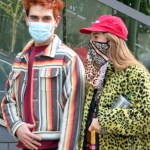 KJ Apa shared a new eye-catching TikTok video that showed him doing some wild dance moves with his abs while showing off his impressive thick beard and wearing only shorts.

KJ Apa, 23, got major attention on July 6 when he posted an incredible TikTok video under a new and interesting username that proved he’s got amazing dancing skills. The Riverdale star, who goes by “fifisqueen” on the social media platform, was shirtless and wearing only black shorts in the clip and his thick beard and longer locks had him looking like Tom Hanks‘ role as Chuck Noland in the 2000 film Cast Away. He appeared to film the video by himself outside under gorgeous palm trees and a blue sky and surely took fans’ breath away when he busted the moves.

Can’t stop will NOT stop

KJ wiggled his toned abs along with his shoulders in the dance sequence, which was set to the song “Stunnin'” by Curtis Waters and featuring Harm Franklin, and he also lifted his arms and moved them in various swimming-like motions. “Can’t stop will NOT stop,” he captioned the post.

Around the same time that the memorable video went public, KJ took to his Instagram story to repost it and post other videos that show him telling the camera how much he loves TikTok. “I’m addicted to it!” he enthusiastically said in one video while saying “I love TikTok” in another that showed him sitting in a car.

Before his latest TikTok dancing clip, KJ posted a couple clips that showed him confidently dancing to other jams, including one in which he was laying down and lip-syncing. “my very first one. Please don’t judge!” he captioned the first post while captioning another with “I can’t stop.” He also included the hashtag #freefifi in one post, referring to his username.

KJ’s not alone in his fascination for TikTok. Other celebrities have joined the website while in quarantine to post the funny videos that are mostly made up of people acting out song lyrics and/or dance moves. Jennifer Lopez, Arnold Schwarzenegger, Britney Spears, and many other stars have hopped aboard the app’s train and have been entertaining us ever since.

We can’t wait to see what else KJ comes up with in his TikTok videos in the near future!