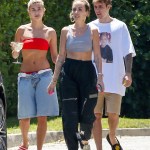 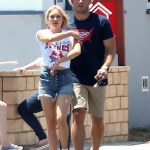 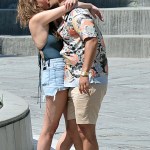 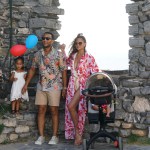 Just like us, our favorite stars are celebrating the 4th of July! With the outbreak of COVID-19 and the Black Lives Matter movement, celebrations are looking a little different this year, but that didn’t stop stars like Miranda Lambert, 36, from celebrating America’s 244th birthday! The Wildcard singer went for a dip in her pool, posing on a Flamingo floatie next to hunky husband Brendan Mcloughlin. “Happy 4th y’all!!!” she captioned the photo, which also featured a cameo by her adorable chihuahua-pug mix Delta Dawn. “Delta Dawn says don’t forget to put your pets somewhere safe tonight before the fireworks,” she added, hashtagging her pet charity Mutt Nation.

Larsa Pippen, 45, stunned in a glam selfie to celebrate the occasion. “Happy 4th,” the Chicago native simply wrote, showing off her glam neutral makeup, including a sexy matte smoky eye. Larsa stunned in a scoop neck black top and diamond necklace as she appeared to be seated in a car, with her blonde highlighted hair cascading around her face. The mom-of-four’s lips looked plumper than ever, accentuated with her ’90s inspired nude lip. While she didn’t share where she was headed, she certainly looked ready for a 4th of July bash!

Fresh off his break-up from Shayna Taylor, 28, Live with Kelly & Ryan host Ryan Seacrest was feeling particularly festive! The 45-year-old sported a pair of glasses featuring the American flag, along with a blue, red, and white button down by designer Todd Synder. “Happy Fourth!” he wrote to his 5 million followers, also including videos of some hilarious outdoor games, including the always-classic ring and bean bag toss. “10% skill, 90% luck. Happy 4th of July!” he added, surrounded by colorful red, white and blue decor. Just like Miranda, Bachelor star Peter Weber, 28, and his girlfriend Kelley Flanagan, 28, soaked up the sunshine in a swimming pool! Kelley rocked an American flag inspired bikini top as she sat atop Peter’s shoulders, who opted for a turquoise blue board short.

Nicole “Snooki” LaValle, 32, was ready for some fun-in-the sun with her blue star print bikini top with red straps! “Vodker Soder weekend,” she hilariously wrote, referencing the go-to beverage of vodka and soda. The Jersey Store star kept her highlighted hair in a half ponytail as she demurely smiled for the selfie, clearly ready for a weekend to unwind! Teen Mom star Jenelle Evans, 28, appeared to be on the same wavelength as she stretched out on a tanning chair in a cropped t-shirt and green bikini bottom. “Don’t bother me,” the reality star captioned the photo, including the hashtag “#HappyFourthOfJuly.”

Reese Witherspoon, 44, took the opportunity to both celebrate the annual holiday but also encourage her followers to register to vote ahead of the next election. “Celebrate your Independence by making sure you are registered to vote! It’s up to every U.S. citizen to be part of creating the change you want to see in our country,” she Draper James founder captioned an animated image that read “United We Vote” by illustrator Libby VanderPloeg. The poignant image also showed people from all walks of life holding hands in unity. “Let’s get involved in our communities, our schools, our local governments. Your participation MATTERS,” the Oscar winner urged.

Celebrate your Independence by making sure you are registered to vote! It’s up to every U.S. citizen to be part of creating the change you want to see in our country. Let’s get involved in our communities, our schools, our local governments. Your participation MATTERS. @whenweallvote @rockthevote @iamavoter 🇺🇸 #UseYourVoice #RegisterToVote

Stay tuned to HollywoodLife to see more of your favorite celebrities getting into the 4th of July spirit, as we’ll be sure to share updates of the latest photos right here!