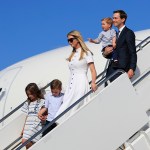 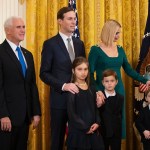 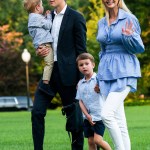 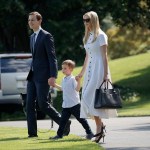 Ivanka Trump and stepmom Melania Trump used to use unflattering code names for each other when they thought nobody was listening, claims a new book. Introducing: ‘The Princess’ and ‘The Portrait’.

They have a loving relationship now, but things used to be frosty between Ivanka Trump and her stepmother. Melania Trump, who is just 11 years older than President Donald Trump‘s eldest daughter, was the recipient of a less than flattering nickname from Ivanka after she started dating her father. When Ivanka was “younger,” writes journalist Mary Jordan in her new book, “she privately called Melania ‘The Portrait’, telling classmates that her father’s girlfriend spoke as much as a painting on the wall.”

Ouch! The feeling was mutual, though, Jordan writes in The Art of Her Deal: The Untold Story of Melania Trump. Melania reportedly had her own nickname for her future stepdaughter at the time: “The Princess.” She would only use the moniker when she was out of earshot of Ivanka, according to a source who spoke to Jordan. Melania and Donald began dating in 1998, when she was just 28 years old and Ivanka was 17.

The supposed feud between the First Lady and First Daughter reared its head in 2017, shortly after Donald was inaugurated president. Melania stayed behind at the Trump Tower in New York City until June, when their son, Barron Trump, 14, finished his school semester. As Jordan also writes in The Art of Her Deal, there was more to that story. Melania was actually spending that time apart negotiating a better prenup to protect Barron’s future, according to the book.

In the meantime, Ivanka stepped up to have a bigger role in the White House than presidents’ children usually have. Some even referred to her as the “de facto first lady” — which allegedly rubbed Melania the wrong way. Ivanka reportedly attempted to move her office into the East Wing of the White House — the first lady’s domain — and rename it “The First Family’s Office.” Melania shut that down immediately.

Ivanka, now one of her father’s senior advisors, made herself at home at 1600 Penn while Melania was away in New York, as well. “With Melania away, Ivanka used the private theater and enjoyed other White House perks,” Jordan wrote. “Some said she treated the private residence as if it were her own home. Melania did not like it. When she and Barron finally moved in, she put an end to the ‘revolving door’ by enforcing boundaries.”

Jordan writes in her book that while Melania may seem outwardly quiet, as Ivanka once pointed out, she’s privately outspoken. In fact, it was her who first suggested that Donald run for president, and kept his head in the game when he faced snags on the campaign trail. “She’s the one who ultimately said, ‘You know, Donald, stop talking about running for president and do it.. And if you run, you’re going to win,” Roger Stone, Donald’s former campaign consultant who was sentenced to prison for witness tampering and lying to investigators in the Mueller probe.