Nikki Bella hosted her gender reveal party on the June 11 episode of Total Bellas! While Nikki’s sister, Brie Bella, decided to wait and be surprised by the sex of her baby, Nikki hosted a fiesta-themed party to find out what she was having. While she busted open a pinata, her fiance, Artem Chigvintsev, shot a confetti gun into the air, and blue smoke, sparkles and confetti flew all around them — IT’S A BOY!

Although Artem was admittedly hoping for a little girl, he and Nikki were both thrilled after finding out the exciting news. The episode was filmed back at the beginning of 2020, so Nikki has been keeping her baby’s gender a secret for quite some time now. During the episode, it was also revealed that Nikki is due on August 6, while Brie’s second child is expected on July 27. So, if Brie is a few days late and Nikki is a few days early…their kids could be born on the same day! 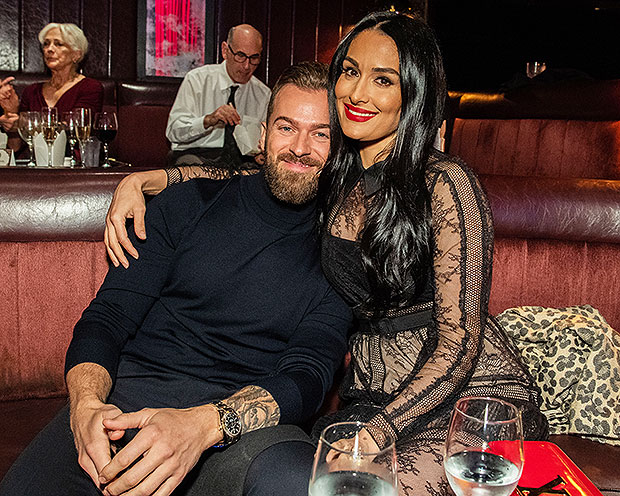 Although the episode ended with a lot of excitement, there was some tension leading up to it. Nikki’s pregnancy was admittedly unexpected, and Brie was concerned that her sister was moving a little too fast. After all, during last week’s episode, Nikki said she was “freaked out” over being engaged.

“I don’t want my sister to rush everything,” Brie admitted, after learning that Nikki was pregnant. “I feel like everything’s been rushed with her lately. I don’t want to take away from her having this child because it’s such a beautiful thing, but when someone tells you that they feel things have been moving too fast, and in less than 24 hours, they tell you they’re carrying that person’s baby…how does one handle that!? I just want to make sure she has a strong head on her shoulders because her whole life is about to change.”

While Nikki was excited about her pregnancy at first, she became less thrilled once she caught wind of Brie’s hesitation. “Brie’s reaction took away the excitement of this pregnancy,” Nikki said. “I was scared, and Artem made it feel magical and beautiful, and now my sister has taken all that away. I shouldn’t feel this way.”

Brie’s fears were escalated when she noticed that Nikki wasn’t wearing her engagement ring. When she questioned her about it, Nikki explained that the ring had been getting fixed and she just had to pick it up. This led Brie to wonder why Nikki was waiting so long to go pick up her new piece of bling. “Anything that connects me to someone forever…I freak,” Nikki admitted. “But I have no idea why.”

Throughout this entire season, Nikki has been open about her commitment issues, which she said stemmed from watching her parents fight for so many years and eventually get divorced. “I hate that I feel this way,” Nikki added, amidst the engagement ring fiasco. “I’m always up and down. I don’t know why, but I have to figure out what’s going on. We’re having a baby together.” Naturally, Nikki’s back-and-forth behavior was concerning to Artem. “With Nicole, it’s always a bit of a yo-yo,” he explained. “You never know what you’re going to get. It’s scary, but I just have to make peace with it.”

Finally, Nikki spoke with both of her parents about how their past has affected her current relationships. She received encouraging words from both of them, who urged her to not let their actions define her. “I kind of realized, I can’t let my childhood make me freak out about commitment and my future relationships,” Nikki concluded. “I just have to let go. I’m ready to do this and we’ll see where it goes.” Total Bellas fans will continue to see the ladies’ journey to childbirth and beyond with season six, which E! confirmed returns this fall.