The proposal finally happened on this week’s episode of Total Bellas! Nikki Bella and Brie Bella took a trip to France for their wine collection. They were joined by Nikki’s boyfriend, Artem Chigvintsev, as well as Nikki’s mom, Kathy, brother, JJ, and JJ’s wife, Lauren. In France, Artem’s parents and brothers met up with the group, and it was an emotional reunion, as Artem hadn’t seen them in years.

What Nikki didn’t know was that there was a much bigger reason for both families being on the trip — Artem was going to propose on her birthday! He planned the whole thing out with Brie beforehand, and once the group got to France, he pulled Kathy aside to talk to her about it. Like Brie, Kathy was concerned about what Nikki, who admittedly has commitment issues, would do if Artem proposed. 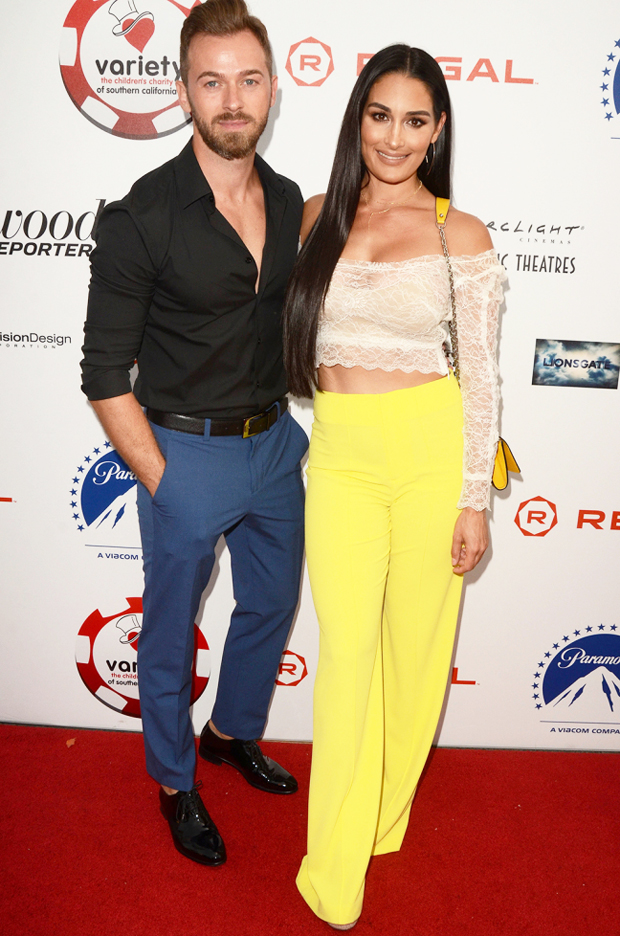 “I just go back to that day [at the zoo] when you acted like you were going to ask her and she freaked out,” Kathy admitted. However, Artem wasn’t concerned about Nikki’s previous hesitations. “I feel like it’s time and I feel very ready,” he said. “I’m going to go with my gut feeling.” By the end of the conversation, Kathy was convinced that Artem proposing was just right. “I would feel very blessed having you as a son-in-law,” she raved. “I see how you take care of my daughter. I see in both of your eyes how much you both love each other. You must know in your heart that the timing is right.”

With that out of the way, Artem still had a lot to plan. He used Nikki and Brie’s birthday as an excuse to have the families gather at a gorgeous chateau, which he decorated with roses and candles with some help from Brie and Kathy. “I’m still stressed,” Artem revealed. “The stakes are really high. I want the proposal to be perfect. There’s lots of little steps that can go wrong and if one goes wrong, it could lead into a major disaster. I’m just hoping all the cues and music and settings are exactly what I envision, because I know Nicole is a perfectionist, as well, and she’ll only appreciate it if it’s perfect. There’s no room to fail.”
As the families sat down to dinner, Artem took Nikki into another room of the chateau, and surprised her with a string orchestra playing. She was in absolute shock at how romantic it was. Finally, Artem gave his proposal speech.
“I feel like when we met [on Dancing With the Stars], it was definitely fate,” he said. “The thing is, when I fell in love with you, it was completely out of my control. They say that love is a single soul inhabiting two bodies. You turn my world upside down, but in the most incredible way and I love you so, so much. I don’t even think words can describe how you make me feel and how much I love you. I want to spend every sunrise and sunset with you. What I’m trying to say is…will you marry me?”
Nikki was definitely not expecting the proposal, but she excitedly said, “Oh my gosh, yes!” and accepted his stunning ring. “This moment right now…I don’t even now what to think!” she gushed in a confessional afterward. “I feel like the world has stopped. It’s a dream. I feel like a queen!” Next up!? A pregnancy! But we’ll have to wait until next week’s episode to see how that pans out!
Articles Trending Now