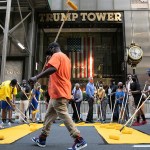 While speaking virtually at her former high school’s graduation on June 3, Meghan Markle broke her silence about George Floyd’s death and the current state of racism in America.

On June 3, Meghan Markle gave a commencement speech to the graduating class of 2020 at Immaculate Heart High School in Los Angeles (the same school she graduated from herself). In her address, Meghan discussed the “devastating” state of America right now, following George Floyd’s death. She mentioned George, as well as other black men and women who were shot by white police officers, by name in the speech.

The Duchess of Sussex has spoken out about the “absolutely devastating” death of George Floyd in a message to students at LA’s Immaculate Heart High School, her alma mater. Meghan told the class of 2020: “George Floyd’s life mattered…I know you know that black lives matter.” pic.twitter.com/qe7ZxvAk45

This was the first time Meghan has spoken publicly since George’s death on May 25, which led to protests across America and a nationwide call for action against racial injustice. “What is happening in our country and in our state and in our hometown of L.A. has been absolutely devastating,” Meghan, who relocated back to Los Angeles with Prince Harry earlier this year, said. “And I wasn’t sure what I could say to you. I wanted to say the right thing.”

The 38-year-old also recalled a lesson that she learned during her sophomore year at Immaculate Heart High School. “My teacher at the time, Ms. Pollia, said to me before I was leaving for a day of volunteering, ‘Always remember to put others’ needs above your own,'” Megan recounted. “That has stuck with me throughout my entire life, and I have thought about it more in the last week than ever before.”

She continued by recalling being “11 or 12 years old” during the L.A. riots, which were also triggered by racism. “I can’t imagine that at 17 or 18 years old, which is how old you are now, that you would have to have a different version of that same type of experience,” Megan admitted. “That’s something you should have an understanding of, but an understanding of as a history lesson — not as your reality. So I’m sorry, in a way, that we haven’t gotten the world to the place that you deserve it to be.”

To conclude her message, Meghan urged the graduating seniors to “use their voice” to help change the future and be “part of the movement” that brings the country together. She also pointed out that most of them will be able to vote in the next election, and urged them to do so. “You are equipped, you are ready, and we need you, and you are prepared,” she said. “I’m so proud to call each of you fellow alumni, and I’m so eager to see what you’re going to do. Please know that I am cheering you on all along the way. I’m exceptionally proud of you, and I’m wishing you a huge congratulations on today, the start of all the impact you’re going to make in the world as the leaders we all so deeply crave.”