Ben Affleck was all smiles as he picked up coffee and breakfast on Saturday, May 30. The 47-year-old cut a casual figure on the sunny Los Angeles morning in a navy blue hockey-themed tee which read, ‘don’t poke the bear’. He paired it with lighter blue Under Armour sweat pants and green sneakers. The multi-hyphenate Hollywood A-lister appeared upbeat as he balanced several iced coffees, snacks from Dunkin’ Donuts and two Amazon packages in his arms. 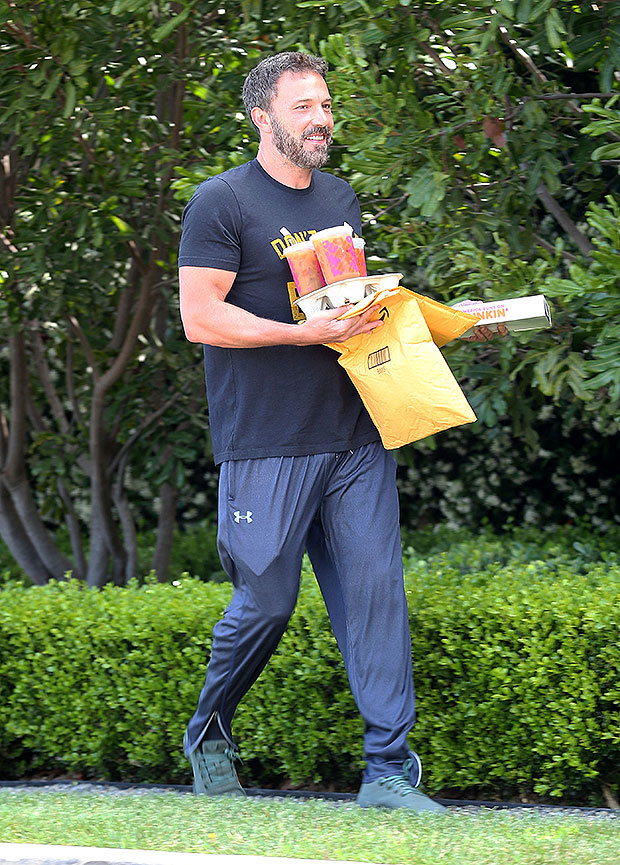 The early morning breakfast run comes just one week after Ben introduced his kids Violet, 14, Seraphina, 11, and Samuel, 8 to his new girlfriend Ana De Armas, 32! The loved-up couple were spotted out for a walk in Jennifer Garner‘s Brentwood neighborhood with Ben’s three mini-me’s on Saturday, May 23. Although their A-list mom wasn’t along for the stroll, her = golden retriever Birdie joined the group, along with Ben’s german shepherd Hutch. The group of five all wore protective face masks as they enjoyed the sunny 60 degree weather and picturesque tree-lined streets.

The family’s quarantine stroll came one month after sources told HollywoodLife that Ben was waiting for the right time to introduce his kids, especially when it came to approval from his ex-wife. “Ben is very respectful of Jennifer’s wishes when it comes to their kids so any decision to have him meet Ana will be run by her first,” a source told us EXCLUSIVELY. “Right now it’s not even being discussed or planned for because of everything happening with coronavirus. But Ben is very serious about Ana and he will eventually want her to meet his kids,” they also said at the time.

Ben and Ana have been quarantined together since the beginning of the pandemic, and frequently take fresh air breaks, getting out-and-about on the streets of Los Angeles. The pair also escaped California for a quick getaway to Joshua Tree in celebration of her 32nd birthday. The Oscar winner went all out for his Deep Water co-star, decorating a desert home with celebratory balloons and arranging a yummy-looking chocolate cake.
Related Link