Ben Affleck was giving off some serious Chasing Amy vibes when he and girlfriend Ana de Armas, 32, took their dogs for a walk on Monday (May 25.) The 47-year-old Ben must have found his clippers because he suddenly had a beard without a spec of gray in it. Just a month prior, Ben was seen sporting a salt-and-pepper beard that was more salt than pepper, and while he looked good, this new makeover is incredible. Ben looked decades younger during his walk with Ana, and judging by his smile, he seems happier to see the gray go away.

Sure, they were still a little gray in the hair atop his head, but that both acknowledges his four-plus decades of life and makes him look distinguished. After all, if Diddy has shown anything during the past few months, gray quarantine beards are the chic COVID-19 fashion trend. However, Ben inadvertently took that trend overboard when he was spotted arriving at Jennifer Garner’s house in early April. While reuniting with his three kids – Violet, 14, Seraphina, 11, and Samuel, 8 – the Dogma star’s beard was almost as completely gray as the Boston Red Sox cap he wore. While Ben isn’t as young as he was when he appeared in Dazed and Confused, Mallrats, and Good Will Hunting, the gray in that photo was a little startling for a man who isn’t even 50 yet. 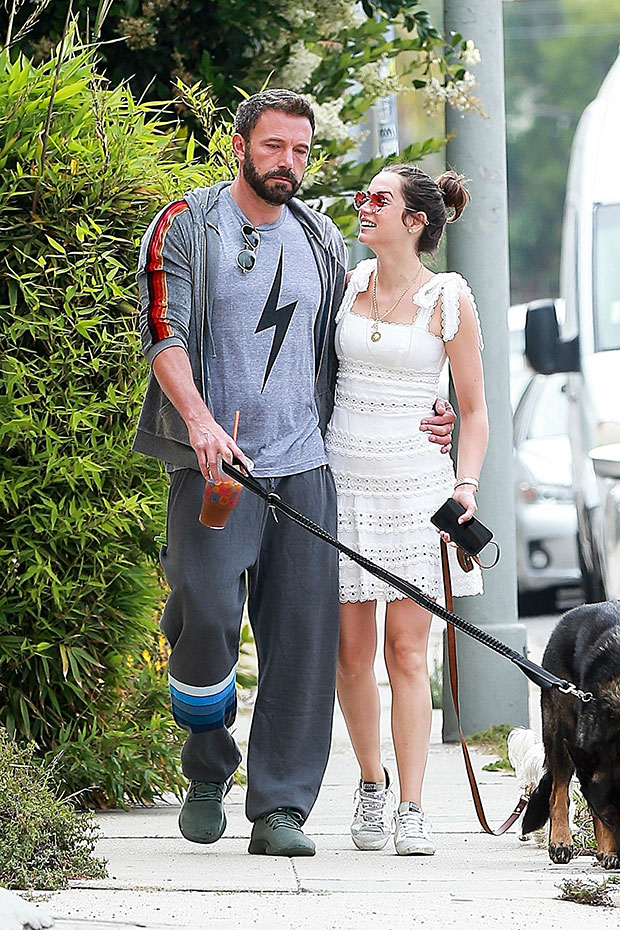 Sometime between that visit and Ana’s 32nd birthday (April 30), Ben decided to shave off the gray. “Thank you all for the birthday wishes and love!” she captioned a celebratory Instagram gallery, one full of pictures from her and Ben’s trip to Joshua Tree, California. The locale is just hours away from their home in Los Angeles, and it appears that they decided to change up the scenery in honor of her birthday. Ben also changed up his look, because, in Ana’s gallery, his beard looked more youthful and darker.

It appears this younger-looking Ben was the one who introduced Ana to his kids on May 23. Though all five of them wore masks while taking their dog Birdie out for a walk, the parts of Ben’s beard peeking out of the mask seem less gray than before. This was a big deal because a source told HollywoodLife EXCLUSIVELY in April that Ben’s kids meeting Ana “was not even being discussed or planned for because of everything happening with coronavirus.” However, the insider said that Ben was very serious about Ana and that he eventually wanted his and Jen’s kids to meet her. This meeting was going to happen “when the time is right,” and it seemed that “right” time came sooner than expected!