Khloe Kardashian often responds to the loving comments on her Instagram photos, but she also lets the trolls have it every once in a while, too. The reality star took to social media to share a series of new photos on May 28, and one person asked, “Why do you look so different in all your photos?” Well, Khloe must be sick of so many people commenting on her quarantine look, because she sarcastically wrote back, “From my weekly face transplant, clearly.” Khloe received similar comments about her ‘changing’ look on another set of pics earlier this month, as well.

It’s no secret that Khloe isn’t afraid to clap back when she feels it’s necessary. Earlier this week, she actually defended herself and her famous family members for having a party amidst social distancing guidelines. When someone called the KarJenners out for gathering themselves and their kids for an outdoor bash on May 26, Khloe fired back with a comment to explain that they were actually doing nothing wrong. In fact, their event met all of the current guidelines put in place in the state of California. 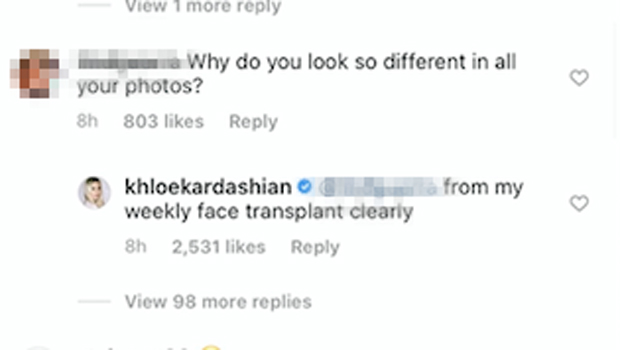 “We know how they have been quarantined and there’s less than 10 people with us,” Khloe explained. “It’s literally what the governor states is perfectly OK to do in the state of CA.” Khloe shared a series of videos from the party, which was for Scott Disick’s birthday, on Instagram, and everyone looked healthy and beyond happy to be together again!

The Kardashians have been supporting Scott following his brief stay at a treatment facility at the beginning of May, as well as his recent breakup from Sofia Richie. In addition to the party, Scott also took a trip with Kourtney Kardashian, as well as the pair’s three kids, to Utah over Memorial Day Weekend.