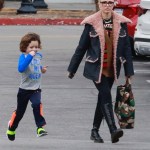 Gwen Stefani will be celebrating her eldest son Kingston’s birthday with a ‘big family party’ in Oklahoma with her BF Blake Shelton and extended family.

Blake Shelton and Gwen Stefani may be quarantined in Oklahoma, but that won’t stop them from throwing an epic celebration for her eldest son Kingston‘s 14th birthday. The couple are isolating with her younger kids Zuma, 11 and Apollo, 6, along with extended family members. A source close to the couple told HollywoodLife exclusively that Kingston’s birthday will be a big family party. “Gwen has a ton of her family there. They have been quarantined with them, so this weekend will be one big family party. Blake’s compound is right on the water [Lake Texoma] so they love going out on the boat,” they dished, adding, “Blake has all the toys, ATVs, tons of fancy water guns, video games, it’s paradise for the kids — and the big kids [the adults] too.

The source also said there would be a lot of food involved in the May 26 celebration. “Food will be a big part of it, they all love to indulge and especially on holidays they don’t hold back. They all do their part, even Blake will be cooking and, of course, putting a few Smithworks back all weekend.” A second source told HL that Blake would be “grilling like mad” over the weekend. “He loves his steaks and doing the whole barbeque thing and that is going to be the main takeaway and highlight of the weekend,” the source said.

“They are just going to relax and do a whole bunch of nothing since he doesn’t have The Voice to deal with. So they are going to be pleasantly boring and that is exactly what they want the weekend to be.” It comes just days after the couple made The Voice season 18 finale extra special with a sweet rendition of their song “Nobody But You.”

As usual, Blake and Gwen were absolutely adorable when they performed together at Blake’s bar Ole Red in Oklahoma. Of course, this wasn’t the first time Blake and Gwen have performed their duet while in quarantine. The couple teamed up to sing “Nobody But You” during the ACM Presents: Our Country special in April 2020. It was the comforting performance we all needed during this crazy time.