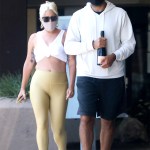 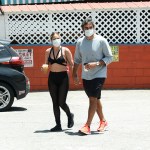 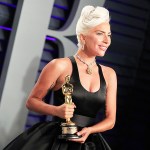 Ahead of releasing her new album, ‘Chromatica,’ Lady Gaga teamed up with Ariana Grande to drop a monster track. It’ll make you want to hit the dance floor asap (AKA, your living room), even if your tears aren’t ‘dry’ yet.

If fans weren’t hyped about Chromatica before, they are now. One week before Lady Gaga unleashes her sixth studio album upon the world, she has given fans another taste by sharing “Rain On Me,” her epic collaboration with Arana Grande. It’s the perfect blend of house, electropop and synth-heavy dance music that’ll force you to throw your arms up in the air and groove the night away (even if you weren’t exactly in the mood to do so). That’s the whole point of the song!

“Teardrops on my face / water like misery,” Ariana and Gaga sing, before they launch into the pre-chorus: “I’d rather be dry but at least I’m alive.” The collab is like a Chicken Soup for the Soul for those in need of a good, soul-healing cry. Shortly after the song dropped, Gaga took to Twitter and wrote, “One time I felt like I was crying so much it would never stop. Instead of fighting it, I thought bring it on, I can do hard things. @arianagrande I love you for your strength and friendship. Let’s show them what we’ve got.”

Ariana and Gaga “connected right away, and she was so wonderful,” Gaga said to Apple Music’s Zane Lowe during a May 21 interview. “And I think maybe she assumed that it be that she came in and I was like, ‘Here, just sing this and thank you so much for your time.’ Right? But instead, I asked her what she needed, how she wanted to do things. When we were vocally producing her … I was sitting at the console and talking to her. And then I remember I said to her, ‘Okay, now everything that you care about while you sing, I want you to forget it and just sing. And by the way, while you’re doing that, I’m going to dance in front of you,’ because we had this huge big window. I was like, ‘I’m going to dance in front of you.’ And she was like, ‘Oh my God. Oh my God, I can’t, I can’t. I don’t know. Oh, my God. Okay, okay.’ And then I did it, and she sang, and she started to do things with her voice that was different. And it was the joy of two artists going, ‘I see you. And I see all the things that we all…'”

“[S]he was so open to trying things that she hasn’t done before,” continued Lady Gaga. “She was, ‘I’m going to just trust you.’ And it was this beautiful, I think a very healing process for me…not necessarily having a female artist that mentored me as I came up. And being able to be with her and hold her and be like, ‘Anything that you feel chains you, any pop cultural construct that you feel you have to live up to, I’d you to please forget about it and be yourself.’ That woman has been through some really tough, really hard life testing stuff, undoubtedly. And her ability to move on. When she came into the studio, I was still crying, and she was not. And she was like, ‘You’re going to be okay. Call me, here’s my number.’ And she was so persistent. She would try over and over again to be friends with me. And I was too ashamed to hang out with her because I didn’t want to project all of this negativity onto something that was healing and so beautiful.”

“And then this friendship blossomed and this song Rain On Me, the lyrics that I wrote right here in this studio, ‘I’d rather be dry, but at least I’m alive. Rain on me.’ This is about an analog of tears being the rain. And you know what it’s also a metaphor for, is the amount of drinking that I was doing to numb myself. I’d rather be dry. I’d rather not be drinking, but I haven’t died yet. I’m still alive. Rain on me. Okay, I’m going to keep on drinking. This song has many layers.”

One time I felt like I was crying so much it would never stop. Instead of fighting it, I thought bring it on, I can do hard things. @arianagrande I love you for your strength and friendship. Let’s show them what we’ve got. 👯‍♀️ https://t.co/eX18JePJqg

Gaga first hinted that this collaboration was coming with her PAPER magazine feature, telling the publication that she worked on a song with “a fellow female pop star” who experienced a similar immense trauma while in the public eye. Gaga described the then-unnamed song as a “celebration of all the tears,” before telling PAPER, “I sat with her, and we talked about our lives. It’s two women having a conversation about how to keep going and how to be grateful for what you do.” Additionally, Gaga issued a preemptive strike against the backlash that any celebrity faces when they bemoan the burden of being rich and famous. “75% of the world rolls their eyes,” she said, before adding, “Yeah, you can be in a mansion, but you can still be six feet under in one.”

Prior to the global pandemic, Gaga released the first single and video, “Stupid Love,” at the end of February, despite a version of it was leaked a month earlier. As for what fans can expect when Chromatica drops on May 29, Gaga told PAPER, “I think Chromatica is the most honest thing I could’ve ever created, and I’ll never forget making this record. It’s been one of the most special and hard times in my life.”