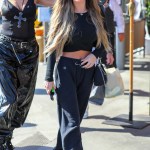 Brielle Biermann has realized that her massively oversized lips that she sported in 2019 were a bit ‘excessive.’ She’s now sporting less fillers and says that small lips are her ‘vibe’ now.

Brielle Biermann made her 2020 New Year’s resolution that she was going to become a “new me.” The 23-year-old then proved it by getting her oversized lip fillers dissolved. She had become known for having such an oversized pout that it was starting to become all that her fans were able to focus on in social media pics. Brielle says in a new interview that she didn’t realize her oversized lips “looked crazy” and that her “vibe” now is about having a smaller and more natural looking pout.

Brielle has been seeing Board-Certified Physician Injector Dr. Thuy Doan in Atlanta since the new year to help change up her look. “I’ve been going to Dr. Doan in Atlanta lately. I dissolved my lips with her in January. I had them plumped up just a little again at the end of January. We’re doing it really slow. Just a little at a time,” the Don’t Be Tardy star tells Us in a new interview.

“I look at photos from last year and I’m like ‘Why didn’t any of my friends tell me?’ Cause I see comments from fans or followers and I’m like ‘They’re just haters, like being rude.’ But my friends I’m like, ‘You guys are terrible. Why did you not tell me that my lips looked crazy?’” Brielle continues. “They were like ‘Well, they weren’t bad.’ But when you look back, it’s like ‘Okay wow. They really are that excessive.'”

Brielle has no regrets about getting rid of her super-sized pout. “As far as missing the huge lips, no not really,” she confesses. “Cause I feel like small lips are kind of like my vibe now. I’m over the big lips. I went through it and I’m done looking like that. I want to be more natural.”

Here’s Brielle showing off her gorgeous, more natural looking lips in a May 8 Instagram selfie:

you know what it is whenever i visit

The stunning brunette wants the world to know that it is only her lips that she’s had done and is shooting down plastic surgery rumors, saying she’s “too scared” of that path. “It really does bother me when people say ‘Oh my god, she’s had all this plastic surgery.’ Because it really is just my lips. Like I’ve never done anything else just because I’m too scared. I’ve seen so many people who have had certain things done. Like they try to get a nose job or they try to fill their cheeks and they just end up looking crazy and I don’t want to look like that. I’m not trying to change my appearance,” Brielle explains.

“I like the way I look. I just never had lips. It was an insecurity of mine since I was really young and the second I turned 18 I went and got them done and I just didn’t know when to stop,” she continues. “And I think that happens to a lot of people. You get this sense of dysmorphia. The second your lips look a little different, you’re like, ‘Oh, my God, I have to go back and get them filled.’ And it’s like, actually you don’t. And once you realize that, everything will be, you’ll get to a good point, which is where I think I’m at right now. I don’t want to overdo anything.” Brielle is definitely at a “good point” and looks so beautiful with her more natural looking lips.