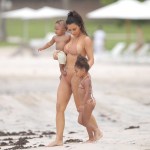 Khloe Kardashian was completely unbothered as she worked on her tan poolside after taking to Twitter and addressing rumors that she was pregnant with her second child by Tristan Thompson.

Khloe Kardashian is soaking up the sun and positivity! The stunning Keeping Up With The Kardashians star, 35, took to her Instagram account on May 14 and showed off her sun-kissed tan and her long legs. The mother-of-one was seated on a lounge chair, poolside, showing off her light pink pedicure and the floating toys in her pool, one of which was a giant pink flamingo. Khloe appeared to seriously be investing in some rest, relaxation, and much needed time for self-care following a frustrating few days.

On May 13, Khloe took to Twitter to address rumors that she was expecting her second child with ex Tristan Thompson, 28. “I don’t go on social platforms much these days AND this is one of the main reasons as to why I stay away,” the Good American mogul exasperatedly began her tweet. “The sick and hurtful things people say. I am disgusted by so many things I am seeing. SMH people swear they know everything about me. Including my uterus. Sick.” But Khloe wasn’t done there. She continued her tweet, writing, “The nasty things you’re saying about me over A RUMOR! I have seen so many hurtful/despicable stories and tweets about me over a false story. And if it were true…. it’s MY LIFE, NOT YOURS.” Khloe clearly put those rumors to bed.

Still, as powerful and succinct as Khloe’s message came across, pregnancy rumors have been a “trigger” for her, as a source explained EXCLUSIVELY to HollywoodLife. “Khloe has dealt with pregnancy rumors for years and years and it’s always been a trigger,” the source revealed. “No matter how fit she is, having people commenting on her body and saying she’s pregnant just feels really crappy. But what really upset her more than anything were the comments about her and Tristan. She’s extremely sensitive when it comes to him because of True [Thompson, 2]. When people say mean stuff about Khloe she can let it roll off her back pretty easily but anything that relates to her daughter in any way triggers the mamma bear in her and she feels like she has to fight back.”

Khloe welcomed her sweet, two-year-old daughter True with Tristan in April 2018. Less than one year later, Khloe and Tristan split after it was revealed that the Cleveland Cavaliers basketball player was caught kissing family friend and Kylie Jenner‘s, 22, confidant, Jordyn Woods, 22. Since then, Tristan and Khloe have worked hard to mend their relationship and focus on co-parenting their adorable baby girl.

In previous episodes of KUWTK, Khloe has discussed with her family the possibility of freezing her eggs and having Tristan as a potential sperm donor should she choose to have any more children. “After my doctor’s appointment, I talked to Tristan because if you can create embryos and do all the DNA testing, I do think that’s the smarter choice,” Khloe said in the April 23 episode. “But it’s weird because, Tristan and I, we’re not together. I don’t know which way to go.”