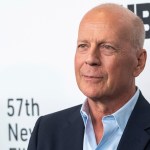 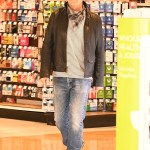 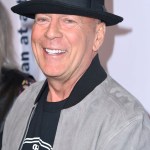 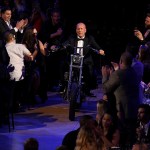 Bruce Willis reunited with his wife Emma and their 2 daughters, Evelyn, 6 and Mabel, 6, as seen in new videos she shared of the family on May 4! Now, they’re all living under one roof with his ex-wife, Demi Moore and their 3 daughters.

Blended and happier than ever! Bruce Willis finally reunited with his wife Emma Heming and their two daughters, Mabel, 8, and Evelyn, 6, after spending eight weeks quarantining separately. Emma shared a series of videos to her Instagram Stories on May 4, that showed the family enjoying the outdoors in Sun Valley, Idaho. — The actor, 65, has been quarantining there with his ex-wife, actress Demi Moore, 57, and their three kids, Rumer, 31, Scout, 28, and Tallulah, 26.

Emma, who was quarantining with the couple’s daughters in Los Angeles, CA, sat on the back of a mini quad with Bruce in the driver’s seat in one clip. The twosome were all smiles as they rode through the sun-kissed woods. Emma posted a cute snap of the couple sitting on the red quad with their daughter, Evelyn. Meanwhile, Mabel was behind the camera, snapping the scenic portrait.

In other posts on her IG Stories, Emma shared a photo of Bruce from behind with Evelyn on his shoulders. Emma snapped the memorable moment alongside a gorgeous pond. She also posted a video of Mabel standing barefoot in a shallow part of water.

Emma and the girls arrived to Idaho just in time for Evelyn’s 6th birthday this week. “This little love turns 6 tomorrow,” she wrote on top of a video of Bruce pushing Evelyn on a rope swing. The clip was set to Khalid‘s song, “Better,” which as the lyrics “nothing feels better than this” played.

Ahead of his wife’s arrival, Bruce and his Demi showed off their dance moves with their three daughters on social media. Their eldest daughter, Rumer posted a video of her famous parents trying to learn the ins and outs of TikTok. The video, shared on May 1, showed Demi and Bruce trying (and failing) to learn a choreographed dance together.

“Act like you like each other,” Rumer joked as she starts filming. The actor was a bit shy at first, but he proved that he’s got some killer moves!

Demi and Bruce, who divorced in 2000, quarantine plans didn’t exactly go as planned. The exes were initially supposed to quarantine with his wife, Emma and their kids in Sun Valley, Idaho at the childhood home that Rumer, Scout and Tallulah grew up in. However, Scout previously explained that Emma and her daughters couldn’t make it when one of the girls had to go to the doctor for a minor injury.