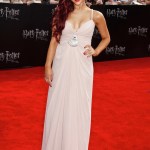 Ariana Grande is flattered by reaction to her performance of ‘I Won’t Say I’m In Love’! Sources tell HollywoodLife EXCLUSIVELY what the singer’s thoughts are on playing Megara in the live-action re-make.

Ariana Grande, 26, is born to play Hercules‘ Megara! The Grammy winner slayed her performance of the films’ signature song “I Won’t Say I’m In Love” on ABC’s epic Disney Family Singalong on April 16 — so much so, that fans are begging her to play the role in the live-action reboot. “Ariana is a huge Hercules fan and she was so happy that the fans loved her rendition of ‘I Won’t Say I’m In Love’ as much as she loved performing it,” a source spills to HollywoodLife EXCLUSIVELY. “Ariana got her start in musicals so starring in a live-action remake of the movie isn’t out of the realm of possibility as far as her capabilities. She’s totally flattered that fans think she should play Megara but it’s way too soon and nothing has been decided yet,” they also revealed.

Prior to her performance, Ari revealed that the 1997 animated film has “always been my #1 Disney movie” — so, naturally, the role of Megara seems like it would be a dream come true! Fans obviously thought so, going as far to start an online petition on Change.org that’s already racked up thousands of signatures. “Ariana is obsessed with Disney and with musicals so this role would be a great fit for her,” a second insider spilled, going on to reference the upcoming live-action re-boot produced by Joe and Anthony Russo. “It’s still way too early in the game to say one way or the other though because they’re nowhere near casting. But it is definitely a big compliment that fans are pushing for her,” the insider also noted.

Disney star Josh Gad — who never fails to warm our hearts’ as the lovable Olaf in Frozen — also couldn’t resist praising Ari after her epic performance! “She would amazing as Meg, she would be perfect, I would love to see that happen,” he gushed in a April 30 interview with Variety. Despite being “flattered” by Josh’s comments and that people would consider her for the movie at all, a third source says that Ari remains “focused on her music” and would entertain involvement in the film in other ways.

“Mostly, Ariana would be interested in doing a theme song over anything else — sort of like what she did with Beauty and the Beast with John Legend a few years ago,” the source told us, moving away from the idea that Arana would potential star in the movie. Ariana and John slayed the 2017 cover of the Beauty and the Beast‘s title track, which complimented the Emma Watson film perfectly. “When it comes to something like Hercules, she loves the film and that changes things up to where she would take meetings and see where it would go. But ultimately she bounces in her mind back and forth that as much as she would love to do it, she also wouldn’t want to ruin it and ruin her memories of the original film. She goes back and forth on chasing those dreams and would for sure highly consider it if offered, but it really is based on her schedule and what she is doing in music at the time,” they also said.

The new live-action remake of Hercules follows Disney’s recent successes of Beauty and the Beast and Aladdin, but outside of a screenplay writer and producers, no further details have been announced. The film remains in “early stages” of development our sister publication Variety reported on April 30. Tate Donovan voiced the role of Hercules in the 1997 animated film, while Tony Award nominee Susan Egan lent hers’ to the character of Megara.