During an April 30 interview, 50 Cent opened up about Tekashi 6ix9ine and why he wouldn’t ever collaborate with his former mentee in the future. “I wouldn’t work with him,” 50 admitted to Big Boy of LA’s Real 92.3. “What it is, it’s just against the way I grew up.” Tekashi caught wind of the interview on Instagram, and commented on TheShadeRoom’s post about it. “Won’t be the first time 50 abandons his son,” Tekashi wrote. “Lemme just mind my business.” Of course, he’s referring to 50’s strained relationship with his 22-year-old son, Marquise Jackson.

50 Cent has been vocal about the fact that he does not agree with Tekashi’s decision to testify against members of the Nine Trey Gang as part of a plea deal that helped him receive a shorter sentence. At the beginning of April, shortly after Tekashi’s release from prison, he answered fan questions on Instagram Live. One person asked 50 if he’d “seen his son yet,” referring to Tekashi, and the Power star responded, “Nah, I ain’t heard from Tekashi. He’s his mother’s child. He told on everybody.”

50 also threw shade at Marquise during the IG Live, adding, “He better than Marquise, though. I’ll take him before my actual [son]. F*** that n****.” 50’s beef with his son began back in 2008, and stems from the rapper’s feud with Marquise’s mom, Shaniqua Thompkins. Both 50 and Marquise have not been shy about throwing shade at one another on social media over the years. 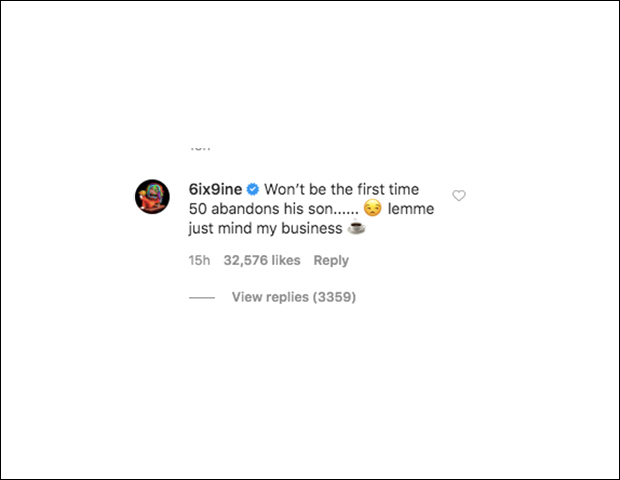 Meanwhile, at the start of Tekashi’s career, he was open about being inspired by 50 Cent, and 50 took Tekashi under his wing. However, the state of their relationship drastically changed after Tekashi’s recent prison sentence (he was released early and put on house arrest due to fear of coronavirus in the prison).