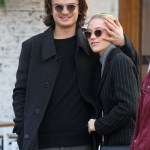 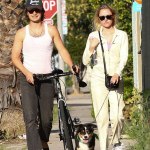 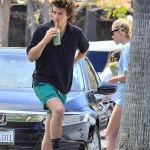 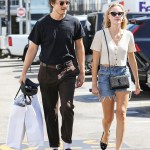 Joe Keery dressed in the most colorful of ways while out with his gorgeous girlfriend Maika Monroe!

Casual attire never looked so good! Joe Keery, 28, was spotted out grabbing a drink with his ladylove Maika Monroe, 26, in Los Angeles on Wednesday, April 29. The Stranger Things star took color coordination to a whole new level when the beverage he was sipping from practically matched his green Nike shorts! He also sported a loose-fitting black polo, black and grey socks and boots for the west coast outing with his long hair slicked back. Things got that much cuter that day as they brought along his Australian Shepherd puppy Tina for the fun outing! She looked to be having a grand ole time while he held her in his arms. Maika, meanwhile, could be seen in the background of one of the pics where she looked comfy in a baggy t-shirt and shorts.

Joe went through a major follicle crisis last year that left people in complete shock when he debuted a bowl cut makeover while showing up to a Chanel party at the Chateau Marmont in West Hollywood in September. Stranger Things fans know him for his character Steve Harrington’s trademark long mane so it was quite jarring to see him appearing very different. Looks like he’s back to the way they know him in the hair department based on his recent outing. Phew!

The Massachusetts native is one of the many stars who have been seen out and about rocking some short shorts lately as the summer is rapidly approaching. Kendall Jenner, 24, put her gams on display in just a grey sweatshirt and matching grey shorts an Instagram pic of her walking her doberman pincher doggy Pyro on Thursday, April 16.

Hunky singer Harry Styles, 26, also turned heads in his own short shorts outfit while going on a hike in Los Angeles on Tuesday, March 31. The former One Direction star looked focused as he made his way through La La land with his toned legs on display.