Steve Harrington with bangs was more frightful than any of the monstrosities unleashed in all three seasons of Stranger Things — combined. At least, that’s how it seemed when Joe Keery, 27, showed up to a Chanel party at the Chateau Marmont in West Hollywood on Sept. 12. Joe’s “bowl cut” makeover made Stranger Things fans have fits as if they were attacked by a hundred Elevens, but Joe seemingly doesn’t think it was that big of a deal. “It’s just a regular person getting a haircut,” Joe told Entertainment Tonight during New York Comic-Con. “

As to whether or not Steve Harrington’s trademark mane will be back to full glory in time for Stranger Things 4, judging by the hair Joe was rocking at NYCC, it’s safe to say that fans can rest comfortably. Steve’s hair was free-flowing and fabulous during his chat with ET, proving just what a little product can do. Plus, he didn’t seem too enthusiastic to talk follicles, as the conversation shifted over to Free Guy, his movie with Ryan Reynolds, Taika Waititi, and Jodie Comer.

Let’s take a moment of silence to remember Joe Keery,” one fan commented after seeing Joe’s “bowl cut” at the Chanel event (a launch party for Margot Robbie’s Gabrielle Chanel Essence fragrance.) While wearing a nice suit – one that showed off an oddly amount of chest hair – Joe combed his hair forward in this mock Beetles-style ‘do that no one liked. “He was an absolute shining star of ultimate hair goals. He will forever remain in our hearts. RIP mullet man.” 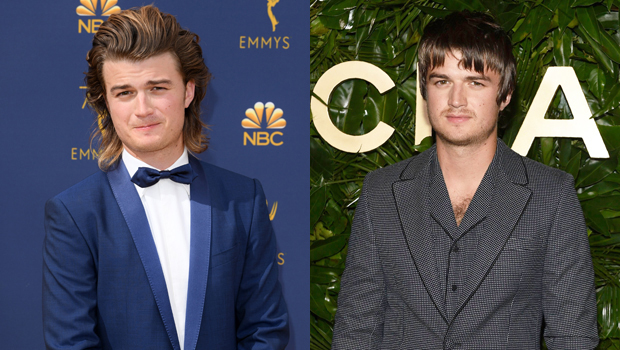 Of course, with a little bit of product and some combing, Joe’s hair was back to normal. When he and girlfriend Maika Monroe, 26, went for a shopping trip in Beverly Hills on Sept. 18, his locks were long, wavy and wild – just like those of Steve Harrington. So, false alarm? Though, Joe said that they haven’t started filming Stranger Things 4 yet. Perhaps the Duffer Brothers will do something REALLY shocking and have Joe shave his head to join an oi punk band?

After a too-long wait, Netflix confirmed that Stranger Things 4 was a go. In the teaser, released at the end of September, the show’s iconic music swells before sharing the season’s tagline: “We’re Not In Hawkins Anymore.” Of course, the second after the teaser was released, fans began dissecting it, frame by frame. Some have theorized that the new season might have the return of a certain character. So, Steve Harrington’s mullet is not the only thing coming back next season.