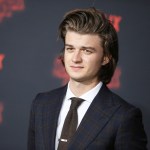 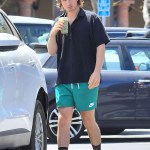 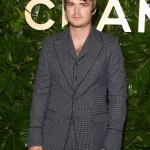 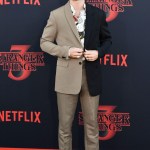 Um, did we just wander into the Upside Down? It certainly seems like we’re in a parallel universe, because Joe Keery, 27, just attended a Chanel dinner without his floppy mane that made him the perfect image of an ’80s jock (a la Steve Harrington of Stranger Things). The long locks were replaced with a bowl cut as the Netflix star posed for a picture at the Chateau Marmont in West Hollywood on Sept. 12, where Margot Robbie was hosting a party with Chanel for the launch of her Gabrielle Chanel Essence fragrance. Don’t worry, the bangs weren’t that blunt — we’re not talking Edna’s do from The Incredibles — so it still fit the delicate balance between indie millennial/model boy of the Reagan era that he has to upkeep.

Regardless, the hair makeover was pretty extreme for fans who have grown comfortable with his image on Stranger Things. “✨In loving memory of joe keery ✨he ain’t dead but his hair is,” a mourning fan tweeted, while another Twitter fan penned a hair eulogy: “Let’s take a moment of silence to remember Joe Keery. He was an absolute shining star ultimate hair goals. He will forever remain in our hearts. RIP mullet man.”

Well, change is always good. Joe is venturing from his comfort zone, and not just in the hair department. On the same day his haircut rocked fans, he dropped his debut solo album, Twenty Twenty, under his rock altar-ego Djo. He also landed a guest role in the upcoming third season of CBS’ comedy series, All Access, which our sister website TVLine reported on Sept. 9.

Joe’s not the only star to debut a bowl cut in recent days. Charlize Theron, 44, also underwent the controversial makeover for her new role in Fast and Furious 9, which she revealed to fans on Sept. 2. Perhaps Joe and Charlize are the pioneers of what will be the hottest new trend in celebrity hair?