Chris Brown thinks Ammika Harris is stunning — and he’s letting her know it. Ammika took to Instagram on April 26 to share a gorgeous photo of herself wearing a bra top, with her hair cascading down her back. In the pic, she looks fresh-faced, with minimal makeup on, aside from a natural-looking glow. Chris popped up in the comments section of the photo to write, “PRETTIEST WOMAN ON THE PLANET!!!!” Fans loved that the singer took notice of Ammika’s stunning pic, and replied to him with messages full of heart emojis and more.

This is not the first time recently that Chris has slid into Ammika’s comments section. On Easter, she posted another gorgeous pic on the ‘Gram, and Chris commented, “[Red heart emoji] you.” In November 2019, Chris and Ammika welcomed a son, Aeko Brown, together. However, they’ve never confirmed the status of their relationship, and Ammika has been quarantined with Aeko in Germany, while Chris is back in Los Angeles. Clearly, he’s been missing the mother of his child during this time!

Of course, he’s also been missing Aeko, but as HollywoodLife EXCLUSIVELY reported, he’s been heavily keeping in touch with both of them via FaceTime. Ammika has also been sending Chris pictures and videos of the five-month-old, and Chris has shared several of them to his own social media page in recent weeks.

A woman born from the lotus 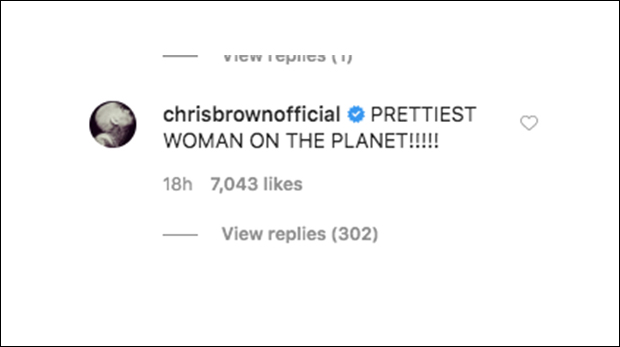 Aeko is Ammika’s first child and Chris’s second — he also shares Royalty Brown with Nia Guzman. Fans were absolutely shocked when news broke in 2015 that Chris had fathered a child several months earlier, but he’s totally taken to his role as a dad, and it’s clear that he loves his kids SO much.