A 2017 email sent from Mossimo Giannulli to his financial advisor has been submitted as evidence in the ongoing college admissions scandal investigation. In court documents obtained by HollywoodLife, (see below), after daughter Isabella Rose Giannulli, 21, was accepted to the University of Southern California, Mossimo contacted his advisor to not only discuss a rather large donation made to admissions scandal ringleader Rick Singer‘s charity, but to joke that he’d “worked the system” to help his kid get into her school of choice. The documents includes an invoice for a purported $200,000 “donation” to Rick Singer’s charity, Key Worldwide Foundation (KWF). Mossimo, 56, forwarded the invoice, sent by Singer’s bookkeeper, to the advisor, writing, “Good news my [older] daughter [redacted] is in [U]SC . . . bad [news] is I had to work the system.” As it happens, wife Lori Loughlin, 55, was copied on the invoice email from the bookkeeper.

The FBI alleges in their court case that the money the fashion designer and actress sent to KWF was used to fraudulently get Isabella into USC as part of the crew team in 2017. Their younger daughter, Olivia Jade Giannulli, now 20, was also admitted to USC as part of the crew team two years later. As has been previously reported, neither daughter had any past rowing experience when they were accepted to the prestigious university. A fabricated resume touting Olivia Jade’s supposed rowing accomplishments, previously obtained by HollywoodLife, listed multiple gold medals and rowing competition wins throughout high school. While the races listed happened, Olivia Jade was never part of the team. 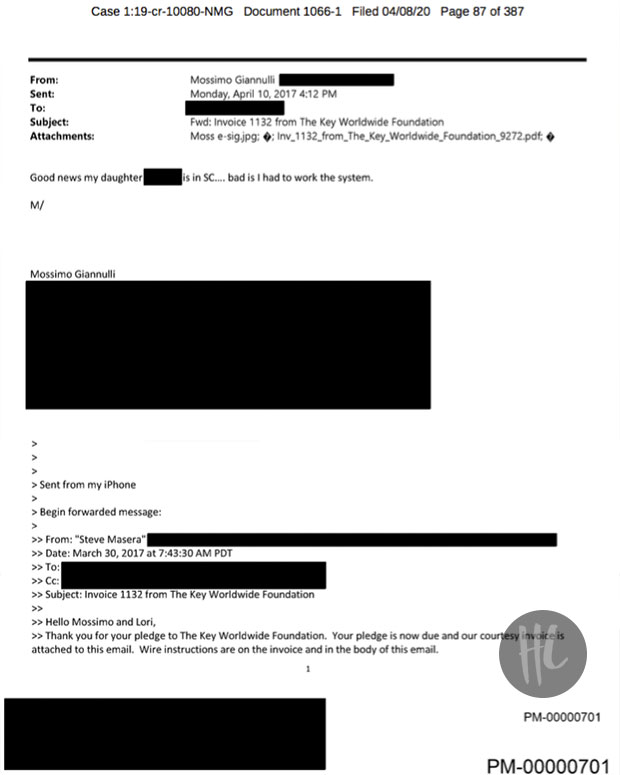 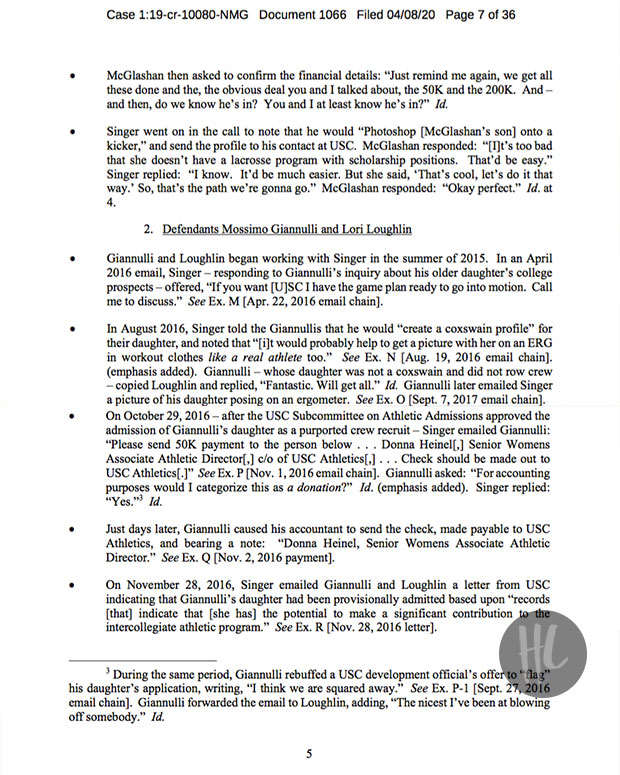 Singer, according to the court docs, told the couple in August 2016 that he would “create a coxswain profile” for Isabella, and requested a photo of her posing on an ERG (rowing machine) in workout clothes “like a real athlete.” Mossimo agreed, and later sent a photo of Isabella on an ERG — which you can see HERE. After USC admitted Isabella as a crew recruit in October 2016, Singer emailed to Mossimo to “please send 50K payment to the person below,” naming Donna Heinel, the Senior Womens Associate Athletic Director at USC.

The FBI released the photo of Isabella on the ERG, as well as a similar photo of Olivia Jade, in response to Lori’s attorneys filing a motion to dismiss her criminal case. The motion is based on her claim that the department instructed Singer to lie about her and her husband’s knowledge of bribes being paid.