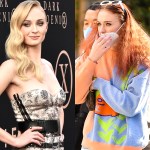 Casey Cott’s tussled brunette hair is no more! The CW star, who plays Kevin Keller on ‘Riverdale,’ got a buzzcut with his brother Corey for a special charity project that has already raised more than $16,000.

Casey Cott, 27, underwent an extreme hair makeover for the sake of charity. The Riverdale star completely shaved his head along with his 30-year-old brother, fellow actor Corey Cott, to raise funds for the non-profit organization Charity Water. All donations to “The Cott Quarantine Cut” project would help the non-profit “bring clean and safe drinking water to an entire community,” according to the campaign’s page. The brothers revealed their buzzcut makeovers in Casey’s Instagram post on April 5, and it was quite a change!

“You guys are epic,” Casey captioned the photo, giving his generous fans a shout-out. The brothers far exceeded their $10,000 goal, and are now at nearly $17,000 (their new aim is to raise $20,000). “Tom Hardy? Is that you?” Casey’s Riverdale co-star, Drew Ray Tanner, joked in the comments section. Another star from Casey’s Riverdale family — Mark Consuelos — showed his approval with two bicep emojis: “💪🏼💪🏼.”

Casey and his castmates are currently taking a break from shooting Season 4 of Riverdale, which was being filmed in Vancouver, Canada until a crew member reportedly came into contact with someone who tested positive for coronavirus. That led Warner Bros. to halt production, making the series fall in line with many other television shows (Carnival Row, Grey’s Anatomy, and more) that have also put filming on the back burner amid the pandemic.

Celebrities are using their newfound downtime to experiment with their tresses! Stephen Colbert styled his long hair into a Jimmy Neutron-esque spiked ‘do, while Jennifer Love Hewitt painted her brunette hair with hot pink highlights. As Casey demonstrated, hair makeovers can also turn into a philanthropic act during this time of need.