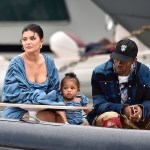 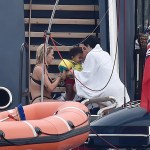 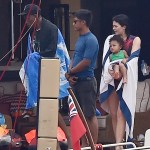 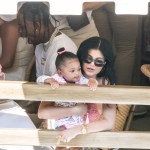 Stormi Webster showed off her feisty personality when her mom, Kylie Jenner, tried to take off the two-year-old’s hoop earrings in a new clip from Kylie’s Instagram story!

Even Kylie Jenner isn’t safe from the terrible twos! In a new clip she posted to her Instagram story on Feb. 18, the Lip Kit mogul, 22, captured her two-year-old daughter, Stormi Webster, getting a bit sassy when Kylie wanted to take off Stormi’s hoop earrings. The adorable clip featured Stormi with a fun filter featuring butterflies over her forehead. With her hair done up into top knots on either side of the crown of her head, Stormi sported a pair of hoop earrings that had her name written in them! “Can I take those earrings, please?” Kylie asked her daughter. “No,” was the quick and brazen response Stormi gave, pouting her lips as her mom recoiled her hand. “What have I started,” Kylie captioned the video. And it was, of course, Kylie who was the reason her daughter was so into her new accessory!

On the same day, Kylie shared a slew of images in a carousel post to her Instagram page featuring Stormi rocking the custom made hoop earrings! Stormi looked like a pint-sized fashionista wearing the earrings. She even admired her reflection in the side of a clean car, which Kylie couldn’t help but share with her followers. The other images featured Stormi smiling and taking in the California sun while her doting mom continued to snap pictures. The final image, though, was definitely the sweetest. It featured Stormi’s profile and a perfect glimpse of one of her earrings with her name written in near cursive font. So cute!

But for fans who have been following the Keeping Up With The Kardashians star and her daughter, this is nothing new for the pair! In fact, Stormi’s become the main attraction of Kylie’s Instagram account, as she continues to chronicle how much her toddler is growing. In her Feb. 17 Instagram story, Kylie showed off just how quickly her daughter is learning by featuring her counting skills! In the adorable clip, Kylie and Stormi held hands while they walked down the stairs. All the while, Stormi was counting with each new step! By the time she got to nine, however, Stormi went all the way to 20! Clearly, she’s nearly there when it comes to her counting.

Whether it’s showing how much Stormi has grown or introducing new, candid moments between mother and daughter, Kylie makes Stormi her number one priority. Since Stormi turned two on Feb. 1, this dynamic duo has been taking the world by storm! Regardless of what it is that Kylie shares next, fans cannot wait to see the next endearing moment between Kylie and Stormi!