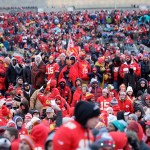 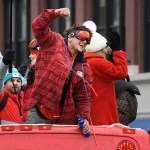 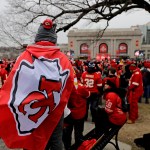 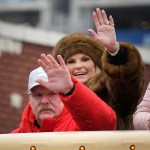 After sealing Patrick Mahomes’ Super Bowl victory with a kiss, Brittany Matthews and the star QB took their love to the Kansas City Chiefs’ victory parade on Feb. 5 — and video showed them having a BLAST.

Days after winning their first Super Bowl in fifty years, the Kansas City Chiefs took a much-deserved victory lap around their hometown, with Patrick Mahones and Brittany Matthews’ love leading the way. During the Chiefs Super Bowl LIV victory parade, taking place in Kansas City, MO on Feb. 5, the 24-year-old quarterback and longtime girlfriend rode atop a truck that made its way downtown. Thousands of fans were waiting below and cheering, as the team rode down the street. At one point, Patrick grabbed a beer and chugged it in celebration, with Brittany by his side.

The party began the moment the final whistle was blown in Super Bowl LIV. After Patrick celebrated the victory over the San Francisco 49ers, Brittany rushed to the field and jumped into her boyfriend’s arms. She planted a sweet kiss on his lips and gave the NFL another iconic Super Bowl photo. Earlier in the game, Brittany was his number one supporter. She shared videos of her cheering on the Chiefs, and once they won the game – 31-20 – she lost her mind. “We fought for our right to PAAAARTYYYY #chiefskingdom,” she captioned an Instagram video of her and everyone in her private box screaming their lungs out in celebration.

Brittany and Patrick’s love has lasted for years. The two first met in Whitehouse High School in Whitehouse, Texas. They’ve been dating since the 10th grade, and even went to prom together in 2013. When Mahome went on to play football at Texas Tech University, Brittany followed her passions, playing college soccer at the University of Texas. Despite attending different colleges, the two maintained their love.

“I didn’t even see myself playing college soccer when I graduated high school,” she told the Tyler Morning Telegraph in 2017. “However, I ended up coming to UT Tyler to play soccer because it was close to home and I knew a few girls that played here that loved it and told me I need to join the family. So, I did, and these last four years have made me fall in love with soccer all over again and want to go on and play professional soccer.” She reportedly signed with the Iceland pro team of UMF Afturelding/Fram. Following her soccer career, she started her own company, Brittany Lynne Fitness.

While Brittany and Patrick are defining “ride or die,” they also have doubled-down on Kansas City. Earlier in the year, Patrick bought a $1.925 million house, and the couple explained that they’re happy to call the city home. “Setting down roots in Kansas City was huge for us. I think the people are what we love the most about Kansas City,” Mahomes said. “We’re trying to be here for a long, long time.”