Sophie Turner brought a very handsome accessory, her husband Joe Jonas, to the SAG Awards 2020 where she looked absolutely dazzling in a bright pink dress.

A-list couple alert! Sophie Turner, 23, and her hubby Joe Jonas, 30, arrived at the 26th Annual Screen Actors Guild Awards red carpet in Los Angeles on January 19 as quite the eye-catching duo. The blonde bombshell looked smashing in a strapless pink dress with a slit that rode high on her left leg. Her sexy outfit also included a pink belt that cinched everything together perfectly which she opted to wear with no jewelry whatsoever as the ensemble spoke for itself. Joe, meanwhile, kept it classic in a fitted tux for the big evening ahead while his ladylove held his arm outside the venue. She and the rest of the Game of Thrones cast were up for Outstanding Performance by an Ensemble in a Drama Series that night. It’s an honor they’ve been nominated for five times before but have yet to win.

They were two of the many stars that showed up and showed out at the annual ceremony. Others who dressed absolutely gorgeous while there included Stranger Things star Millie Bobby Brown, 15, who looked ethereal in a white dress with a matching pair of white pants and heels and former Dr. Quinn, Medicine Woman star Jane Seymour, 68, who sizzled in a sparkly silver dress. Others who scored high fashion points at the SAG Awards were Riverdale actress Camila Mendes, 25, and Oscar winner Lupita Nyong’o, 36.

Sophie and Joe, who wed on May 1, 2019 in Las Vegas right after the Billboard Music Awards, are often caught in a state of PDA similar to how they looked at the SAG Awards. They rocked puffy jackets while keeping warm by holding each other’s hands during a day out in New York City on November 29 right after the Thanksgiving holiday. 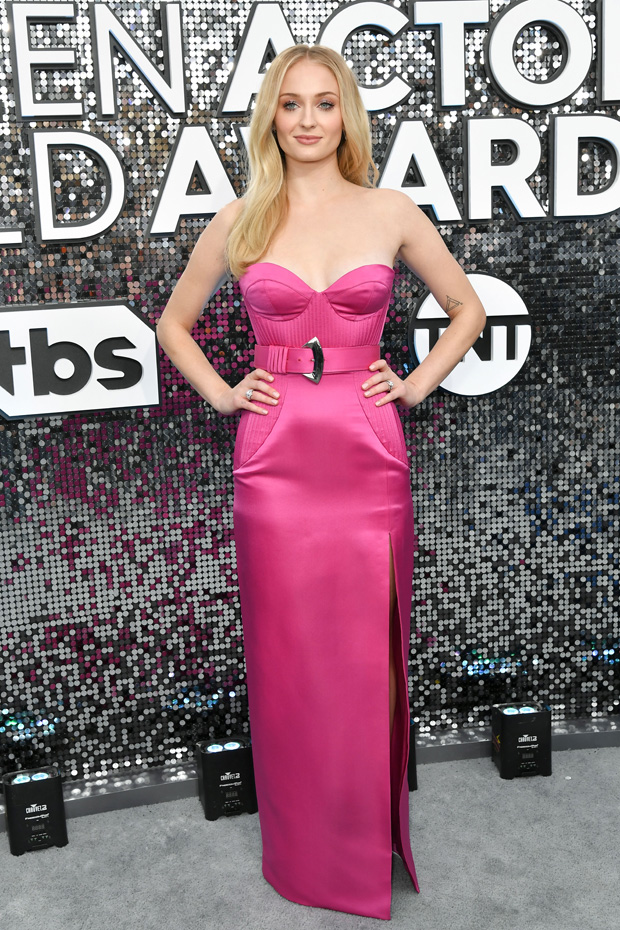 What you looking at? Sophie was caught snooping on Joe’s phone when the two were out and about in Los Angeles on October 17. Her sneak attack occurred while they enjoyed some down time during a sunny day in La La Land.