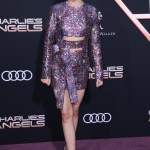 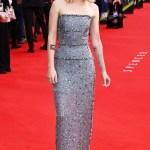 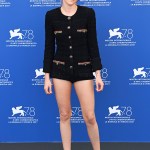 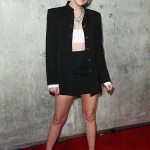 Kristen Stewart kept things sexy while promoting her new film, ‘Seberg’ in an effortlessly cool outfit: a pastel skirt suit and NO top.

Kristen Stewart plays French New Wave femme fatale Jean Seberg in her latest movie, and she absolutely looked the part during a red carpet appearance. The actress, 29, attended a special preview of Seberg on December 10 in Los Angeles, wearing a unique outfit that mixed girly and badass elements for an utterly punk look. Kristen was decked out in (what else?) head to toe Chanel, an ’80s-style skirt suit made of pale pink taffeta. The pleated skirt and bead-trimmed jacket may seem sugary sweet, but it’s all about the details Kristen opted for that made it memorable.

Like… the fact that she went totally topless underneath said jacket. The open-style top had no buttons or clasps, so going sans shirt was a particularly bold choice! One misstep on the red carpet, and there would be a major wardrobe malfunction on her hands. Kristen also layered loads of chains and necklaces decorated with the Chanel logo around her neck, rocked wrists full of chunky bracelets and rings, and slipped on opaque black tights underneath the pastel skirt. Smokey eye makeup, strong brows, and messy, bleached hair kept the ensemble from looking anything but fussy.

Kristen has really been killing it on the red carpet this year. We just saw her get off the international press tour for Charlie’s Angels, during which she wore something incredible at each stop. There was a glamorous, glittery mini dress at the Los Angeles premiere, and high-waisted trousers paired with a bra top and cropped blazer on Good Morning America.

She’ll hopefully reveal what she’d wear to a wedding soon, too. Kristen told Howard Stern in November that she’s “totally” going to propose to her girlfriend, Dylan Meyer, someday! She didn’t go into details about her plans, but said multiple times how much she “f**king loves” her!