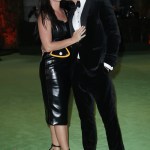 Orlando and Katy got engaged on Valentine’s Day, but have yet to confirm a wedding date! The actor is father to 8-year-old son Flynn Christopher with ex-wife Miranda Kerr.

Orlando Bloom, 42, is ready to expand his family with fiancee Katy Perry, 35! “I really want to enjoy family and friends, my beautiful son, and have more kids,” Orlando revealed in an interview with Man About Town. “I want to make sure when I embark on that, it’s with my heart full and very clear about the reality of what that means, as opposed to some romantic idea of what it means to be in a relationship.” Orlando is already dad to 8-year-old son Flynn Christopher Bloom with ex-wife Miranda Kerr, 36, while a new baby would mark the first child for Katy.

Orlando popped the question to the “Firework” singer on Valentine’s Day with an absolutely stunning flower-shaped diamond ring with a red ruby in the middle. The unique piece fits Katy’s quirky personality perfectly, and both took to Instagram to celebrate the news earlier this year. “Full bloom” Katy captioned a selfie — showing off her ring, of course — while Orlando captioned the same snap “Lifetimes.” The move came after three years of dating, and will be the second wedding for both: Katy was married to comedian Russell Brand, 44, from 2010 – 2012, while Orlando and Miranda’s marriage lasted from 2010 – 2013.

Orlando continued with his thoughts on romantic relationships and love in the interview, opening up about his changing perspectives. “I think when you’re younger, we’ve all been sold this Hollywood idea of love and relationships, marriage and kids,” he continued. “Actually, what it really takes is communication and compromise, so life looks like somebody who’s willing to communicate and find joy in the simple and small moments.” While Katy and Orlando have been mum on details, a source revealed to HollywoodLife EXCLUSIVELY that the couple will be “looking to have a small intimate wedding with very close family and friends and most importantly have it be fun. Both Katy and Orlando are very aware this isn’t their first rodeo, but they also realize it’s still important because they want to share their love for each other with those they love together.”

Katy recently celebrated her milestone 35th birthday along Orlando and a group her closest friends with a lavish trip to Egypt! The couple looked so in love in professional photos taken on the vacation, including one that showed them posing in front of the Pyramids.