Priyanka Chopra, 37, held hands with her love Nick Jonas, 27, outside Craig’s in West Hollywood on Oct. 21. They attended an after party for his band, The Jonas Brothers, at the celebrity hotspot that has attracted hundreds of A-list celebs including Jennifer Lopez, 50, Kyle Richards, 50, and Lady Gaga, 33. The Isn’t It Romantic star dazzled in a gorgeous silk red dress and knee-high suede boots. She accessorized the look with a miniature crocodile print clutch bag and a diamond pendant necklace. Nick, on the other hand, looked as handsome as can be in a blue colored trouser suit and black loafers for their big night out.

Fans swarmed the happy couple as they made their way inside. Nick’s brothers Joe Jonas, 30, and Kevin Jonas, 31, were also seen outside Craig’s on Monday night. The DNCE frontman took a major fashion risk by rocking a velvety blue ensemble with a ton of chest hair exposed. Kevin and his wife Danielle Jonas, 33, mimicked Nick and Priyanka by also holding hands while there. The Jonas Brothers have been enjoying quite the successful 2019 with the release of Happiness Begins, their first studio album in a decade.

Priyanka and Nick enjoyed another exciting night out recently in Las Vegas on Thursday, October 10, for the third annual JBL Fest at JEWEL nightclub. The Baywatch star looked lovely in a sparkling black cocktail dress with a high slit on the right side during their time in Sin City. 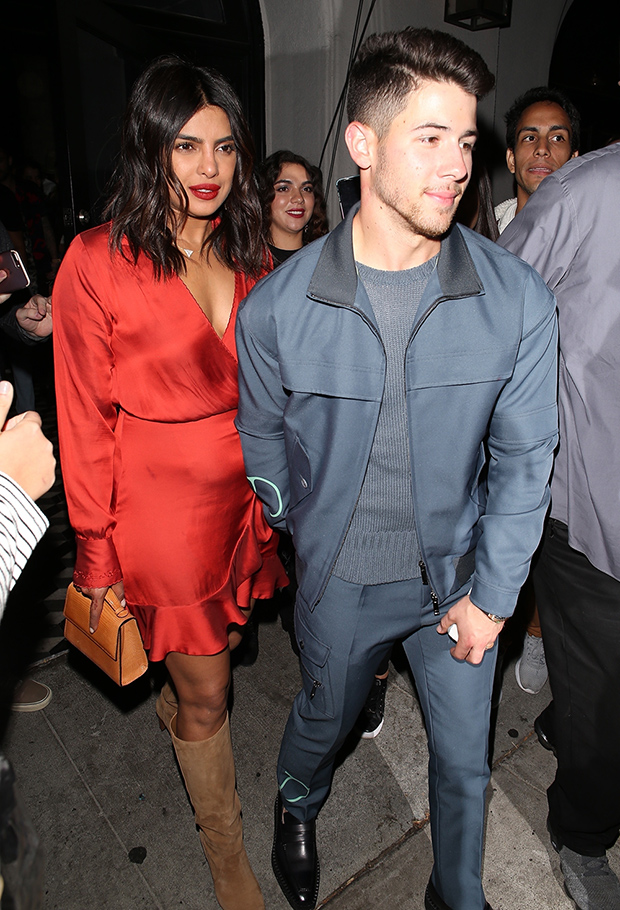 Things appear to be going great for Nick and Priyanka as their one-year wedding anniversary gets closer and closer (they wed on December 1, 2018). The “Jealous” singer honored his ladylove on the Hindu holiday Karva Chauth on Saturday, October 19, which is celebrated by married women in India. He posted two photos of them on Instagram in gorgeous Indian outfits with a romantic caption that included him saying that his wife “is incredible in every way.”

But is a baby on the horizon for the actress and singer? Priyanka opened up about starting a family with Nick during her appearance on Today on Tuesday, October 8. “I can’t wait. I really can’t wait,” she said in response to host Hoda Kotb telling her that having her two kids was “the best decision” she ever made. “I mean there’s so much that happens in our lives that whenever God blesses us with that it’s something that we both definitely want.”