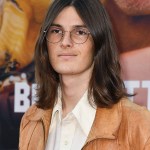 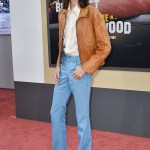 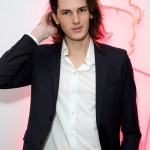 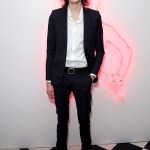 Paris also talked about his passion for the environment and giving back in an EXCLUSIVE interview with HollywoodLife at Clarins and The Malibu Foundation’s RePlant Love event Oct. 12.

Paris Brosnan may only be 18, but he’s already making a splash in the fashion industry! Pierce Brosnan and Keely Shaye Smith‘s youngest son began working as a model in 2017, and the college student has already covered GQ Korea and walked in shows for designers like Dolce & Gabanna and Balmain. “It’s exciting!” Paris gushed about his career to HollywoodLife EXCLUSIVELY at Clarins and The Malibu Foundation’s RePlant Love event at the Paramount Ranch on Oct. 12. “I am thankful for this creative outlet and the opportunity to be surrounded by inspirational designers and artists.”

Paris, of course, has been around creativity his whole life through his dads’ success in entertainment: Pierce is a household name in film, fronting the James Bond franchise for years and appearing in movies like The Thomas Crown Affair and Mamma Mia! The striking father-son duo recently made a splash at London Fashion Week’s Fashion For Relief event on Sep. 14 and the teen was thrilled to share the experience with Pierce. “I obviously look up to my dad, and being able to share this extraordinary experience with him in London made it really special,” Paris shared.

Paris’ mother, Keely, is also a tour-de-force in the entertainment industry working as an actress, television producer and journalist. “My family inspires me,” Paris continued. “Both of my parents work in the entertainment industry and both are also are passionate environmentalists.” His mother Keely is perhaps best known as an environment expert, appearing on ABC’s The Home Show and Good Morning America, as well as producing Home Green Home for PBS — and the green bug has rubbed off on her youngest son.

“I once heard my mom say: ‘A society grows great when old men plant trees whose shade they know they shall never sit in’… But honestly, the most important thing we can do to help combat climate change is to pick a cause that we believe in that is authentic to our individual lives and values,” the 18-year-old continued. “I know I can amplify my voice by creating films that will raise awareness around the world. Someone else might choose to go vegan, drive an electric car, or build an eco-friendly house with solar panels. Collectively, each and every act makes a difference.”

Clarins, a plant-based beauty company, and the Malibu Foundation came together to host the event in an effort to revive Malibu’s Paramount Ranch which was devastated after the Woolsey Fire last fall. The fires were considered one of the most catastrophic in history, with many — including Miley Cyrus and Gerard Butler — tragically losing their homes. The Oct. 12 community initiative saw 700 volunteers plant more than 3,000 native trees and shrubs, which will impact the climate and capture 40 metric tons of carbon in one year.

“Replanting trees in fire affected areas is vital for our future,” Paris continued. “I was raised in Malibu and witnessing the devastation caused by the Woolsey fires made ‘Re-Plant Love’ at Paramount Ranch, deeply personal. This unfortunate event impacted not only my own family and community, but much of southern California. I like being able to help make an impact locally by helping to plant over 3000 trees. It’s rewarding to work on socially relevant projects utilizing the resources I have and to give back to our global community.”

The day featured live performances by Brandon Jenner, as well as Raspberry Blonde — a band fronted by Paris’ older brother Dylan Brosnan, 22, who the rising star also looks to for inspiration. “Dylan is the coolest guy I know. He’s a talented musician, as well as a gifted filmmaker, and he always inspires me to be my best self [and] live my best life.” Paris, also a budding filmmaker, was seen capturing the day on film for his upcoming documentary about the RePlant Love initiative.

“I get to meet and work with people in the fashion industry who want to raise awareness about myriad issues, from preventing hunger, to saving the environment, to championing human rights,” Paris, who is also pursuing a college degree, shared. “Together we CAN change the world.”