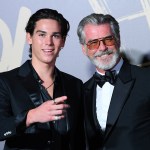 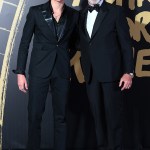 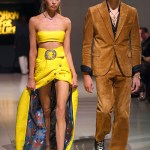 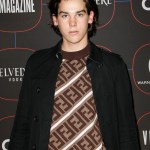 Like father, like son. Paris Brosnan, the gorgeous teenage son of heartthrob Pierce Brosnan, joined his handsome father for London Fashion Week and it’s hard to pick who looked better!

Sure, Pierce Brosnan may not be a young man anymore, but the 66-year-old Goldeneye star still brings the sexy. He was practically smoldering while attending the Fashion For Relief event on Sep. 14. His date for the London Fashion Week event was none other than his model son, Paris Brosnan. The 18-year-old kept it semi-formal by rocking an open shirt, a black jacket, and a pair of Chuck Taylors. Pierce, on the other hand, kept it more refined. He wore a black suit with polished shoes. Inside the event, Paris joined Stella Maxwell to walk down the runway in a brown suede suite (he still kept the sneakers, though.)

Paris is the youngest of Pierce’s five children and the second one the Die Another Day actor had with American journalist Keely Shaye Smith 55. When Paris was 16, he was signed to Next Models and was really turned heads in November 2017 when he graced the cover of Vanity Teen’s fall/winter fashion issue. “Way to go Paris,” Pierce said on Instagram, which was both very posh but also, very sweet. Paris continued to turn heads in December 2017 when he went shopping in Malibu. His skinny jeans and brown suede jacket was to die for.

It turns out, Paris is also not the only model in the family, as his older brother, Dylan Brosnan, 22, (the other son Pierce had with Keely) is signed to IMG Models. Earlier in the summer of 2019, Pierce attended the Los Angeles premiere of Once Upon A Time In Hollywood with Dylan. At 6’5, Dylan towered over his dad (which is saying something, since Pierce is 6’1) and with his shoulder-length hair, he looked like a gender-swapped version of his mother!

In addition to modeling, Dylan is also a composer. He scored the short It’ll Be Alright. He’s also in the band Raspberry Blonde. Paris, on the other hand, also dabbles in film. In May 2019, he debuted his new project, a short film that detailed his recent trip to Sri Lanka and the work being done there by the UN World Food Programme. “When I got the opportunity to go to Sri Lanka, I had to do it – and it was amazing,” he told PEOPLE. “This was an opportunity as a filmmaker to go out and see another part of the world, see how kids are living and shed some light on important issues that are going on there.”