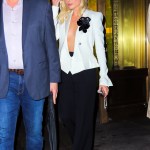 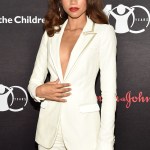 Here’s a new way to style a blazer dress — throw on a sheer mesh shirt underneath! Kendall Jenner did just that to celebrate DKNY’s big day at New York Fashion Week on Sept. 9.

Cue Madonna’s “Vogue” music video, because that’s the vibe Kendall Jenner, 23, has been channeling throughout New York Fashion Week. For DKNY’s 30th birthday party in New York City on Sept. 9, the model wore a black-on-black ensemble that we could’ve imagined The Queen of Pop wearing in her 1990 music video! Kendall attended the bash in a black satin blazer dress high on sheen, but threw in a modern touch by layering a sheer mesh top underneath. A pair of knee-high black leather boots made the ensemble look especially modern. As a wink to the occasion, Kendall carried a patterned DKNY clutch. Singer Halsey, 24, was another big name at the brand’s birthday party!

While Kendall has been sitting out on strutting down catwalks this NYFW, she’s still strutting down the sidewalk in fashion-forward fits. She stepped out for dinner in a Versace slip featuring a black and yellow damask print and a pink lace trim on Sept. 6, and then put a glamorous twist on an athleisure-inspired unitard for another meal in NYC the following night. The Keeping Up with the Kardashians star did admit to missing the runway, though.

“It’s a lot more mellow to just go. But I won’t lie, today I was missing it,” Kendall said of just being a spectator at NYFW in an interview with Vogue, published on Sept. 7. “I was watching the girls and I was like, ‘Damn, I kind of want to walk.'” For now, Kendall’s in the Big Apple for the good times — NYFW is just as much about the parties, as it is about the fashion! “I love New York. All the Fashion Weeks, everyone gathers together for each one, but for this one specifically, it’s those people and then some,” Kendall explained to the magazine. “It’s so fun, and everybody is ready to have a good time.”

Although Kendall has only appeared in two fashion shows this year, she confirmed that she’s hitting the runway again in a separate interview with W magazine. “It was [nice to recharge],” the model told the publication, after Kris Jenner previously revealed that her supermodel daughter “gets the most anxious during Fashion Weeks” in an episode of KUWTK.