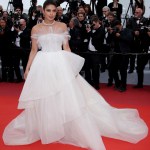 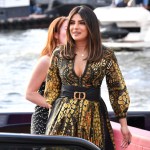 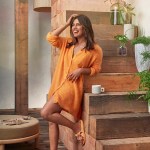 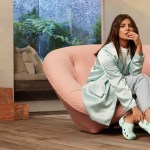 What a goddess! Priyanka Chopra arrived at L.A.’s BeautyCon looking chic and oh so sexy, in a white pantsuit featuring a sheer black top with nothing underneath

Just when we thought Priyanka Chopra couldn’t look any more gorgeous, she manages to outdo herself. This time it was for BeautyCon in Los Angeles on Aug. 10. She arrived looking head to toe flawless, in a white pantsuit with fitted trousers with black bows around the hem. But it was her daring sheer black top with a black satin bow at the top that commanded the attention. It was see through and she wasn’t wearing anything underneath. Fortunately her white blazer sat at an angle that protected her modesty, but the outfit was one wrong move away from a serious wardrobe malfunction.

Since it’s BeautyCon, Priyanka, 37, brought out a seriously glam makeup job. She rocked a smokey eye with red shadow that really made things pop. Her skin looked flawless as ever with a rose blush and she finished things off with a red lip. Priyanka wore her long dark locks pulled back in a tight bun as to allow all the attention to be focused on her incredible makeup and stunning outfit.

Now that the Jonas Brothers are on tour through mid-September, Priyanka has time to do her own events after spending the summer living the best life with Nick. They attended Joe and Sophie’s French wedding in late June then headed to Tuscany for their own romantic vacation. Then it was back to the states as the couple celebrated Priyanka’s July 18 birthday in Miami. The lovebirds  been virtually inseparable all summer so hopefully they’ll be able to log plenty of Facetime hours while Nick is on the road.