It looks like Lisa Vanderpump, 58, wouldn’t be too upset if Bravo went ahead and fired all of her Real Housewives of Beverly Hills co-stars, as she retweeted a fan’s request in which they asked for the network to do so. And guess what? Kyle Richards, 50, took notice. In fact, Kyle seemed pretty annoyed by it because she shared the tweet on her Instagram story on March 7 and pointed out the fact that Lisa retweeted the request that called for her to get booted from the series. The tweet that said “Fire them” was actually a response to another tweet that read, “New title for RHOBH after it falls apart without LVP: ‘Back Stabbing Bitches of Beverly Hills.’ @RHOBH_ #TeamLVP #RHOBH What a disgusting display from Kyle, Dorit, Teddi, Erica, and Rinna #NoClass”. Kyle shared it all, pointed an arrow at the fact that Lisa Vanderpump retweeted the hateful message and then Kyle added her own message, saying it was “interesting” in Spanish.

In case you haven’t been watching the current season of RHOBH, we must note that Lisa has been feuding with the entire cast over a situation that fans have dubbed #PuppyGate on social media. Kyle and the rest of her co-stars believe that Lisa set up a situation on camera — at the start of Season 9 — to make their other co-star, Dorit, look bad. Dorit had adopted a puppy from Lisa’s rescue shelter, Vanderpump Dogs, but after the dog bit her kids and husband PK, Dorit let another “loving home” take the dog. However, the dog then ended up in another shelter, which only angered Lisa. The entire situation has been playing out during the current season of RHOBH, and most of the cast believes Lisa asked her Vanderpump Dogs employees to talk about it on camera so viewers would turn on Dorit. Lisa Vanderpump, however, denies ever doing such a thing. And now fans are taking sides, as evidenced by the tweet that Lisa retweeted on her own Twitter account. 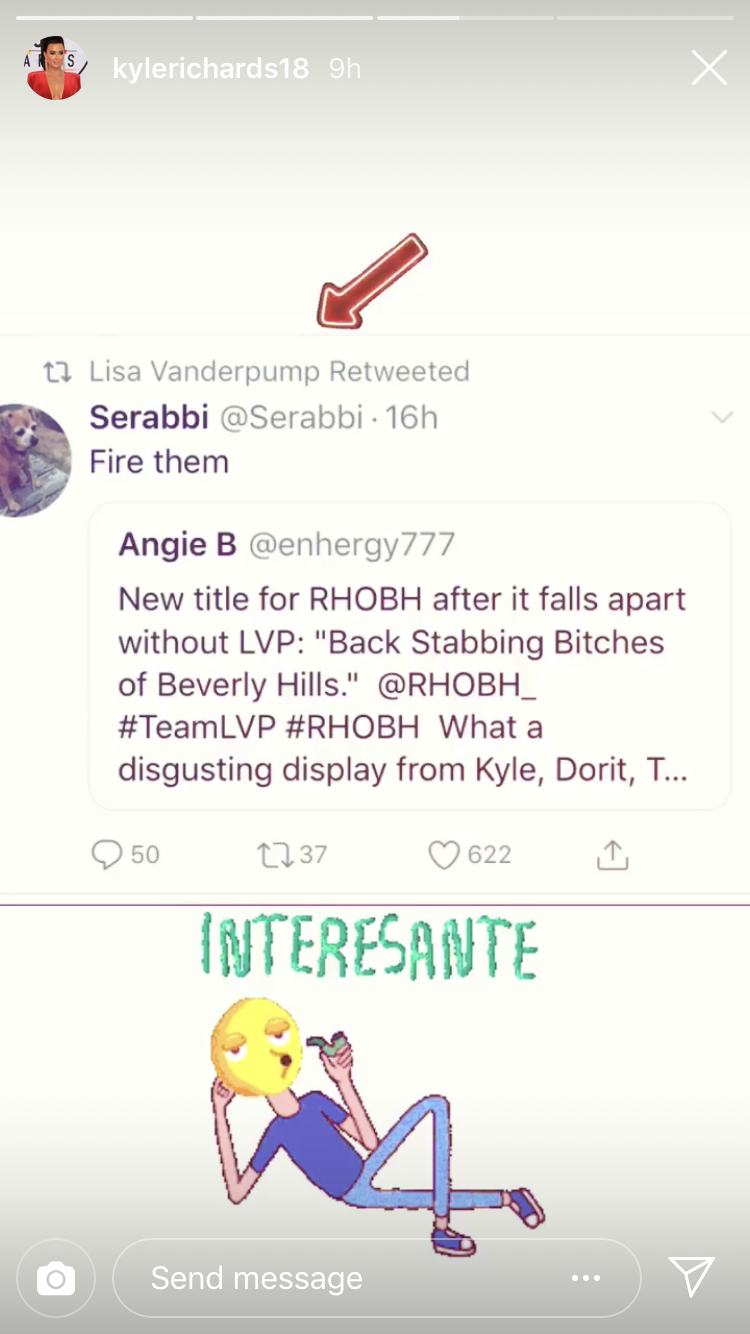 So would Bravo actually fire Lisa’s co-stars? We highly doubt it, but Kyle EXCLUSIVELY told us recently that she hasn’t even talked to Lisa since she got into a huge fight with her that’ll play out later this season. A glimpse of the fight actually aired in the first five minutes of the season premiere, but the episodes that have followed occurred before that incident, as a way to show viewers how Kyle and Lisa got to their breaking point. Sadly, it doesn’t look as though their friendship will be repaired anytime soon… if ever.