Did Prince William subtly shade Meghan Markle while leaving a church service on Christmas Day? In video footage from the apparent moment, he appears to ignore his pregnant sister-in-law. See it for yourself and let us know what you think!

Did he or didn’t he? — That is the question rumbling around the internet after video footage surfaced, which showed Prince William, 36, seemingly ignoring Meghan Markle, 37, while leaving a church service on Christmas Day. In the video, William is seen walking with his wife, Kate Middleton, 36, his brother Prince Harry, 34, and Meghan. His body language seems a bit off, as he adjusts his scarf numerous times. While doing that, William doesn’t even acknowledge Meghan, nor does he look her way.

Meanwhile, Kate is all smiles in the video and even leans over to briefly chat with Meghan. And, Meghan’s husband, Harry is right by her side, guiding her to a vehicle. Prince Charles, 70, is also present in the video. But, it’s Prince William who seems to shy away from the group as they’re greeted by excited fans.

All of this went on amid rumors that the royals are feuding, specifically brothers Harry and William. Why? William allegedly voiced his concern and doubts about how suitable Meghan might be as a royal bride and member of the family. However, Kensington Palace has not addressed the reports. Rumors that Meghan and Kate were feuding also made headlines recently. But, the two have clearly put on a united front, combatting any bad blood reports.

But, fans still can’t shake the apparent video evidence that William gave Meghan the “cold shoulder” on Christmas Day. “William is a shady one, he was suddenly so into his scarf while Meghan was try to talk to him,” one fan noted on Instagram. Another noticed: “William does not want to talk with Meghan. He looked at her so strangely (contemptuously). I even felt sorry for Megan.”

So, what are your thoughts? Did Prince William really give Meghan the cold shoulder? 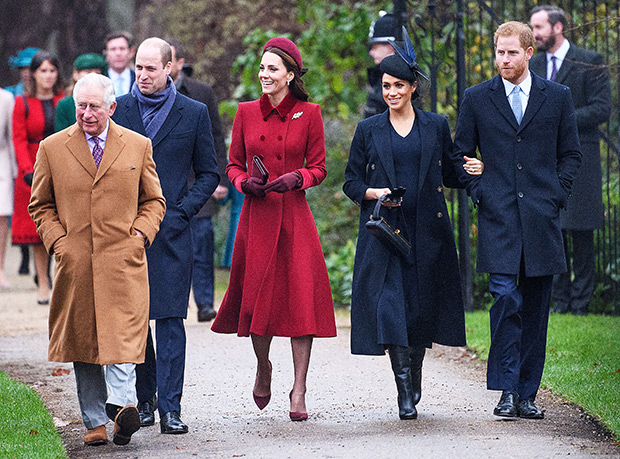 On a lighter note, Meghan was glowing with her growing baby bump dressed in a navy blue Victoria Beckham dress on December 25. While she greeted fans outside church, Meghan also seemed to give an update on her due date. The Duchess of Sussex, who Kensington Palace confirmed would be due in spring of 2019, spoke to a fan and said she’s nearing her due date. “She said, ‘We are excited. We’re nearly there,'” Karen Anvil told E! News about her reported conversation with Markle. The fan also noted that Meghan and Kate seemed to be getting along just fine, despite feud rumors in recent weeks.