Amber Heard is the butt of poop jokes, after Johnny Depp supposedly accused her of going No. 2 in their bed! Fans are throwing savage comments and poop emojis on her Instagram and it’s hysterical!

Fans aren’t letting Amber Heard, 32, get away with this one. After a report claimed Johnny Depp, 55, accused his ex-wife of pooping in their bed as revenge for showing up late to her 30th birthday party in April 2016, fans are trolling the actress! Her Instagram photos are quickly being covered with poop emojis in the comments sections, and the savagery is so real. Amber posted a smiling selfie to Instagram, showing off a “Happy” necklace,” on August 16, seemingly sending a message that she’s not stressed over the poop rumors. But, that didn’t stop Depp fans from dragging her on the gram.

“You’re so full of [poop emoji]! Who does that?” one fan viciously wrote. Another said: “……Can you hear it? Karma is catching up to you. The [poop emoji] will hit the fan (or in your case – the bed). You won’t be happy for long.” Meanwhile, other fans are still in disbelief and questioning the apparent poop act: “is true that you shat on your bed????” one fan asked. Fans even started the hashtag, “we are with you Johnny Depp,” in support of the actor.

If you have yet to be filled in on poop-gate, it was reported on August 15 that Johnny Depp had accused his ex of pooping in their marital bed back in April 2016. Why? — He supposedly claims Amber soiled their bed as revenge after he showed up late to her 30th birthday party. However, Amber vehemently denied the claims, saying it was their Yorkshire terrier, Boo who left behind the poo, adding that the dog has bowel problems. But, fans weren’t buying that either. “Poor dog how could you blame him,” one IG user commented under Amber’s selfie. 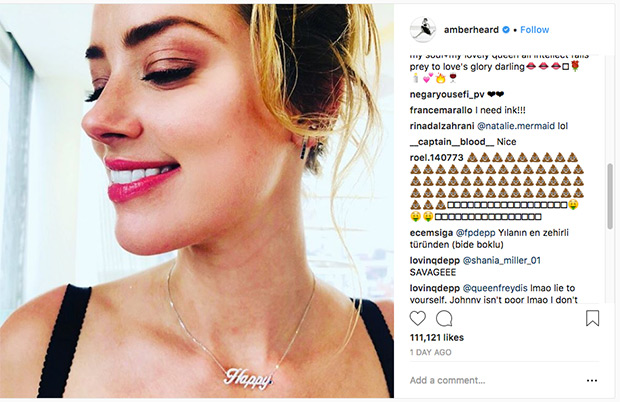 The report went on to claim the poo incident was what led to their divorce, as well as Amber’s eventual abuse allegations against her ex. A source close to the actor said he thinks there is “strong, photographic evidence that connected Amber to the faeces” and that it was left as a “prank”. Nonetheless, Amber denied that too.

“Boo has some serious bowel control issues. There was never a joke, it wasn’t something done to be disrespectful,” a representative for the actress told The Mirror. “It was an innocent thing, it’s what pets will do. We don’t have anything else to say. Ms Heard is moving on and we do not want to engage in this nonsense.”

As previously reported, Depp’s ex, Heard filed for divorce in 2016. They married in February 2015 after they met in 2011, on the set of The Rum Diary. Heard was later awarded $7 million in the divorce settlement, which she donated to charity.