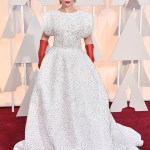 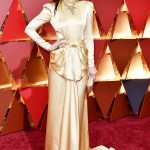 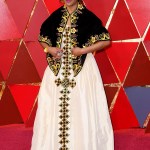 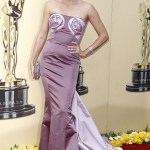 Amidst the glamorous and elegant gowns on the Oscars red carpet, there are always some out-there looks, too! Check out the craziest Oscars looks of all-time here.

Some stars aren’t afraid to get a bit wacky with their Oscars looks! There have definitely been a number of looks that stood out for being ‘out-there’ at the Oscars over the years, whether it’s due to bold colors, crazy cutouts or interesting accessories. Lady Gaga has always been known for her eclectic red carpet looks, and her white dress at the 2015 Oscars was definitely toned down compared to what we’re used to seeing from her. However, the bright red gloves along with the poofy white dress were definitely an interesting combo compared to some of the other chic looks we’re used to seeing on the red carpet.

Meanwhile, at the 2017 Academy Awards, Dakota Johnson wore a dress that covered up pretty much her entire body. The dress was compared to the old-time wedding gown Sandra Bullock was forced to try on in The Proposal, and unfortunately, it did Dakota’s amazing figure no favors. She obviously looked GORGEOUS as she posed for photos, but it was definitely one of the more bizarre looks on the carpet that year.

Sometimes, though, an out-there look is definitely warranted. In 2018, Tiffany Haddish wore traditional African garb on the Oscars red carpet, and while it was certainly a different look, it was important because it paid tribute to her late father. “He said one day I would end up here and if I ever end up at the Oscars , to honor my people,” Tiffany explained. “So I’m honoring my fellow Eritreans!” Amazing.

One of the most memorable wild Oscars looks of all time was Bjork’s in 2001. She literally wore a dress in the shape of a swan, with the head draped over her shoulder. There are plenty of others where those came from, though — click through the gallery above to check out more of the wildest and wackiest Oscars dresses of all-time!