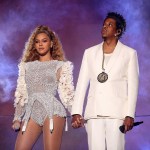 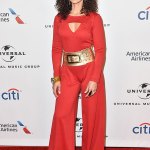 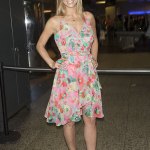 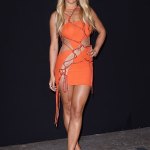 Stephanie Mills, the legendary R&B singer and original Dorothy in ‘The Wiz’, slammed Nicole Curran on Instagram for leaning over Beyonce at the NBA Finals. Besides her love for Bey, here’s what else you should know.

Iconic singer Stephanie Mills, 62, is under scrutiny after dragging Nicole Curran on Instagram for the “Beyonce glare incident.” Stephanie, best known for her disco hits and starring as Dorothy in the original Broadway run of The Wiz, called out Nicole, the wife of the Golden State Warriors owner, for leaning over Beyonce during Game 3 of the NBA Finals, on June 5, to ask Jay Z a question. Bey didn’t look particularly happy in footage of the moment, but it’s a non-issue. Stephanie apparently doesn’t see it that way, though! Stephanie called Nicole “nasty” and “disrespectful,” and a boatload of other things! Here’s what else you should know about the “I Feel Good All Over” singer:

1. She’s apparently a member of the Beyhive. Stephanie posted a screenshot on Instagram of Nicole talking to Jay with Beyonce in between them, captioned: “Nicole Curran, what can I say, you are the wife to an NBA team owner and Beyoncé, is the wife of a billionaire, Jay-Z. Why are you leaning across the Queen B allegedly asking about a f**king lime. I’m sure with all the noise in the arena you could have simply asked his beautiful wife what her husband wanted in his vodka soda. FYI: little nasty Nicki, NEVER disrespect the Queen B by leaning over her. I think they’ve been married long enough for her to know what he likes in his drinks after all she is Mrs. Sean Carter😊” Her followers on Instagram weren’t feeling her, though, telling her that she was blowing things out of proportion.

2. She originated the role of Dorothy in The Wiz. Stephanie started her career as a singer and actress when she was just nine years old, in the Broadway show Maggie Flynn. She rose to fame playing Dorothy in the original run of The Wiz on Broadway from 1975 to 1977. “Home”, her big number from the show, became her signature song. She returned to the role several times, and appeared as Auntie Em in 2015’s The Wiz Live! on NBC.

3. She’s a Grammy-winning R&B and Disco artist. Following The Wiz, Stephanie made a successful leap into R&B and Disco during the 1980s. In one decade, she scored five #1 hits: “Home”, “I Have Learned to Respect the Power of Love”, “I Feel Good All Over”, “(You’re Puttin’) A Rush on Me” and “Something in the Way (You Make Me Feel)”. She won the Grammy in 1981 for Best Female R&B Vocal Performance for “Never Knew Love Like This Before”.

4. She once dated Michael Jackson. Stephanie dated Michael in the late 1970s, when he starred in the film adaptation of The Wiz as the Scarecrow.  “I loved Michael!” Stephanie told Closer Weekly in 2016. “We dated for about a year and a half back in the day. He was the sweetest, most compassionate, most loving person. Very soft-spoken and very humble. He loved to laugh, and he loved Famous Amos chocolate chip cookies. We used to ride up Ventura Boulevard [in LA] and he’d want me to go and get them! He saw me in The Wiz all the time, and I went to the set [of the film] a couple times.”

5. She’s known for being feisty on social media. Stephanie weighed in when Sam Smith said in a video that he wasn’t a fan of Michael Jackson. She went off.  “Don’t come for MICHAEL JACKSON when you wish you have sold as many records and you wish you were the King of Pop like he was,” she wrote in a since-deleted post on Instagram. “I’m so tired of you people studying our music, and studying our artist and claiming that you don’t like our music. Go sit your 1 HIT WONDER a— down and learn how to finish a tour. When you can sell as many records as the king of Pop, Michael Jackson then maybe you can say something. So I say to you Mr. Smith have several seats and come for me if you want to.”