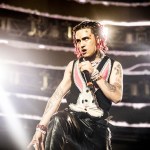 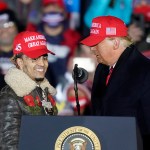 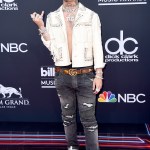 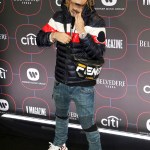 Lil Pump is the latest star to endorse Donald Trump for president. The rapper even joined multiple campaign rallies for No. 45 in Florida and Michigan on Nov. 1 and 2, where he donned a MAGA hat alongside Trump.

Lil Pump has joined the pool of celebrities — including Jay Cutler, 50 Cent and more — who’ve endorsed Donald Trump ahead of the 2020 presidential election. On Sunday, the “Be Like Me” rapper, 20, attended a campaign rally for the president, 74, in Miami-Dade County in Florida. He took to social media to share videos of his front-row seat at the rally.
The next day, on Monday, November 2, Trump welcomed Lil Pump (née Gazzy Garcia) on stage during a separate rally in Grand Rapids, Michigan — by introducing him as “Little Pimp.” (You can tell how tight they are, right?) Pump was pictured wearing a red No. 45 “Make America Great Again” hat at the Michigan rally, where he stood alongside Trump at the podium and publicly declared his support for him.
1. Lil Pump is voting for the first time in the 2020 presidential election. — The rapper first declared his support for Trump on social media at the end of October. He took to Instagram with an expletive-filled rant, slamming Democratic Nominee for President, former Vice President Joe Biden for wanting to raise taxes on the wealthy. “All I gotta say is ‘Trump 2020 b–ch. F–k I look like [I’m] paying an extra 33% in taxes for Biden,” Pump said before calling Biden “sleepy Joe” — a Trump-infused insult that the president has used to describe his Democratic opponent. (Note that while Biden has pledged to repeal the Trump tax cuts, he will only repeal the parts that apply to people making more than $400,000 a year).
2. He’s a Miami, Florida native. — Pump, born on August 17, 2000, is an American rapper, singer, and songwriter. He’s previously said that he plans to leave the U.S. for Colombia (where his family lives), if Trump isn’t reelected to a second term.

3. Pump is known for his 2017 single “Gucci Gang.” — After the song’s release, Pump rose to popularity in the music industry. The track went on to peak at No. 3 on the Billboard Hot 100 and reached certified platinum status. The rapper got his start on the music streaming service, SoundCloud with the popular singles, “D Rose” and “Boss.” On October 6, 2017, Pump released his debut studio album titled Lil Pump, featuring Smokepurpp, Gucci Mane, Lil Yachty, Chief Keef, Rick Ross, and 2 Chainz. On February 22, 2019, he released his second studio album Harverd Dropout, which included features from top artists, Kanye West, Lil Wayne, Smokepurpp, Lil Uzi Vert, 2 Chainz, YG, and Migos rappers, Offset and Quavo.

4. He’s been open about having dyslexia. — Pump has mentioned on social media and in his song lyrics that he’s unable to read due to having dyslexia; a learning disorder that includes difficulty reading.

5. Pump has had his fair share of legal woes. — The rapper has been in the news for multiple arrests in 2018, both in and outside of the U.S.