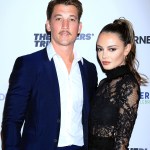 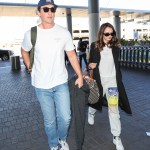 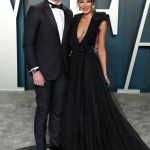 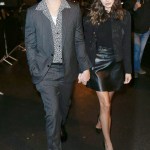 The new Taylor Swift video for ‘I Bet You Think About Me’ features Miles Teller and his real-life wife, Keleigh Sperry. Here’s more to know about the model.

Miles Teller and Keleigh Sperry are the stars of Taylor Swift’s brand new music video for “I Bet You Think About Me.” Taylor dropped the video on Nov. 15, and it stars Miles and Keleigh as a couple on their wedding day. Taylor is Miles’ ex, who he can’t get off his mind, even as he prepares to marry his new bride. During the video, Taylor gifts Keleigh with a red scarf (a nod to her song “All Too Well”) and gives a sarcastic speech at the nuptials.

Keleigh has also been friends with Taylor for quite some time. In fact, in 2014, she was present at the singer’s birthday party, and even posted a photo of herself with Taylor and Jessica Szohr on Twitter at the time. It looks like the friendship has persevered, as Keleigh and her hubby landed the coveted spots of starring in a T. Swift music video. Learn more about Keleigh below:

1. What Does Keleigh Sperry Do?

Keleigh is a model. In addition to her modeling career, though, she has also done some work as an actress. So far, Keleigh has only starred in two short films, aside from her role in Taylor’s new music video. Perhaps this will be what catapults her acting career to the next level!?

Keleigh and Miles met in May 2013 while attending a party for the Black Keys, of whom they had mutual friends. “Keleigh had caught my eye early in the night, and we talked,” Miles revealed in 2019. “I didn’t think it went well, but after a few more attempts, I got her to dance with me, and a week later, we went on a date. After we met, I knew he was The One.” Keleigh added that she “adored” Miles from the “first moment” that she met him.

3. How Long Have Miles & Keleigh Been Married?

After four years of dating, Miles proposed to Keleigh in August 2017 while they were on a safari in South Africa. The two got married in Sept. 2019 in Maui, Hawaii. They chose the location after vacationing there several times with Keleigh’s family throughout their relationship. “We fell in love with it together,” Keleigh admitted. “We both felt happiest there and wanted it to be a big part of our lives forever.”

4. Keleigh Is Friends With Shailene Woodley

In 2021, Keleigh and Miles took a couples’ vacation with Shailene Woodley and Aaron Rodgers and posted all about the getaway on social media. Miles and Shailene have worked together before and remained close, and Keleigh has also struck up a close relationship with the actress. During the trip, Keleigh even posted a video of herself jamming out to none other than Taylor Swift with Aaron!

Keleigh revealed in an October 2015 Instagram post that she is one of six siblings. She posted a photo of her family at a wedding and wrote, “My siblings and our significant others. When there’s 6 kids, it quickly becomes 12 and I love it! Love you guys!”