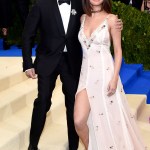 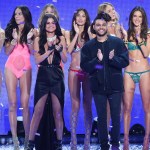 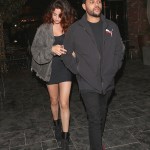 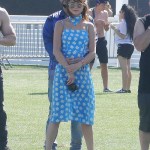 Take a look back at the sweetest moments between Selena Gomez and The Weeknd during their 10-month romance in 2017!

Selena Gomez, 28, and The Weeknd, 31, may have had a short-lived relationship, but it was definitely memorable for their fans, and clearly important to the two stars. Over the years since their fall 2017 split, the former flames have vaguely referenced their relationship in their music. In fact, some fans believe that The Weeknd, born Abel Makkonen Tesfaye, had a Selena look-a-like in his music video for “Save Your Tears” off his 2020 album After Hours. As the two stars continue to capitalize on their incredible careers, let’s take a look back at their most memorable moments during their romance.

The pair went public with their romance in January 2017, when photographers caught them packing on the PDA during a late night dinner date. From then on, they didn’t do much to hide their relationship, and by the end of that month, they had even jetted off to Italy for a romantic and whirlwind vacation together. Throughout the spring, Sel joined The Weeknd at several of his concerts in Europe and the U.S., and got very cozy when they were at Coachella in April 2017.

Selena Gomez & The Weeknd At The Met Gala

In May, Selena and The Weeknd made their red carpet debut at one of the most highly-publicized and biggest events of the year — the Met Gala! They looked so beyond in love while posing for photos together, and videos even showed them whispering “I love you” to each other while heading inside. When Selena turned 25 in July, The Weeknd was on tour in Europe, but he flew back to the States for a super quick trip just to be with her for the big day.

Although Selena and The Weeknd kept their romance fairly low-key, the two did share sweet moments together at major events. While attending the Harper’s Bazaar ‘Icons by Carine Roitfeld’ party at The Plaza Hote in New York City on September 8, 2017, the couple shared a sweet kiss on the arrival carpet. Coincidentally this was actually one of the last public appearances the couple would make.

Selena Gomez & The Weeknd On Dates In NYC

In September, the pair was spending a LOT of time in New York together while Selena filmed a new movie, and they even adopted a puppy named Charlie! Then, when news broke that Sel had a kidney transplant over the summer, it was revealed that The Weeknd was a huge source of support for her after the surgery.

The last time these two were seen together was at the very beginning of October, when they attended Halloween Horror Nights as a couple. It’s still unclear exactly when they split, but by late October, it was revealed that the two had officially called it quits. But let’s look back on happier times! Take a look through the images in the gallery above for more photos of The Weeknd and Selena Gomez’s relationship.