When you hear the name “Selena” your initial thought will probably be about one of two different people: Selena Gomez or Selena Quintanilla. If Gomez is the one that comes to mind first though, you might realize that you’ll sometimes end up thinking of Quintanilla. Why? Well, because their names aren’t where the similarities end. From sporting bangs to curling her hair, there are plenty of styles of Gomez’s that had us doing a double take because of how much she looks just like her namesake.

The “Hands To Myself” hitmaker shared a series of vacation photos to her Instagram account back in August 2018, that had fans pointing out similarities between her and Quintanilla. One selfie of Selena in a bikini top showed her gazing into the camera from under her curly bangs. Her dark hair likely got its wavy texture from ocean water since she was on a boat, but the effect was very similar to that of Quintanilla’s signature curls.

Of course, Gomez isn’t unaware that people compare her to the musical legend. In fact, the reason her name is Selena in the first place is because her parents adored Quintanilla. “My dad and mom were huge fans. My name was going to be Priscilla, but my cousin actually took the name when she was born six months before me. They actually loved [Selena’s] music, so they just named me after her,” Gomez told Sacramento’s NOW 100.5 in a May 2016 phone-in interview. 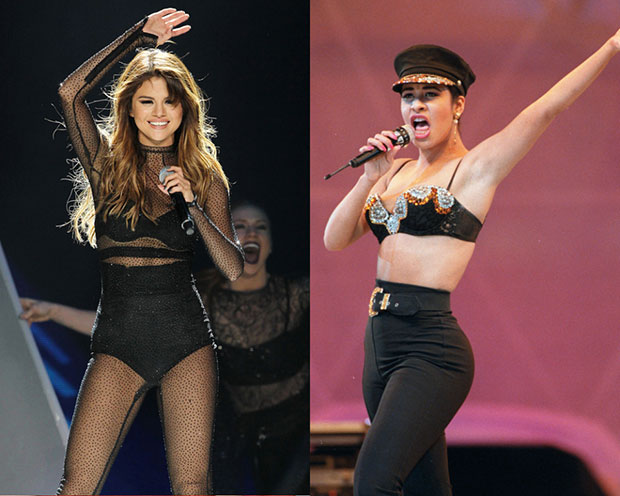 Both Selenas were also born and raised in Texas – Gomez was born in Grand Prairie, and Quintanilla in Lake Jackson. “I grew up and I went to her grave,” Gomez said about Quintanilla. “I got to go to her house. It was really crazy. And then when I started working, I remember I got to meet her family and I just got super emotional ’cause it’s so crazy to see how far everything … I don’t know where she’d be right now. It’s nuts.”

Check out the gallery above to see 10 of the times where Gomez looked just like one of her idols, Quintanilla. On March 31, 2020, and every day, we remember the life and legacy Selena Quintanilla, who died 25 years ago. She was killed by her fan club president on March 31, 1995.