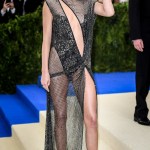 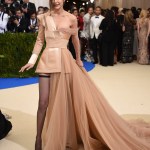 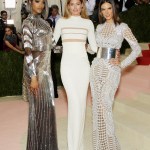 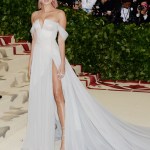 It’s almost the first Monday in May, which means plenty of stars will be flocking to the Metropolitan Museum of Art dressed to fit the theme of “Camp: Notes on Fashion” for the 2019 Met Gala. But before the annual ball kicks off on May 6, we decided to reflect on some of the great fashion seen in years prior – and who better to wear these stunning looks than some of the biggest supermodels in the world? Gigi Hadid, Kendall Jenner, Emily Ratajkowski and more of the most famous models alive have all graced the Met Ball red carpet in spectacular fashion.

In 2017, Kendall showed off her model physique by attending the event practically naked. The Keeping Up With The Kardashians star sported a backless sheer dress by La Perla that featured both a massive cutout across the torso and a thigh-high slit. She paired the incredibly sexy ensemble with mesh heels and added a pop of color with a bold red lipstick. She wore the ensemble to fit the theme of “Rei Kawakubo/Comme des Garcons: Art of the In-Between.”

That very same year, Gigi turned heads when she arrived in an interesting Tommy Hilfiger design. One half of the beige dress emulated an off-the-shoulder tulle gown made for a princess; the other half was short, structured and incredibly edgy since it was paired with a thigh-high fishnet sock. It was basically in-between a ball gown and a mini dress – making it one of the best looks of the night considering many celebs struggled to nail the 2017 theme.

But 2017 is just one year and Gigi and Kendall are just two models. Head up to the gallery above to see even more of the most famous models rocking beautiful dresses at past Met Galas.