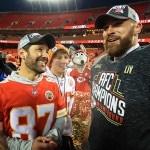 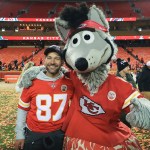 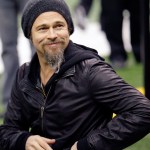 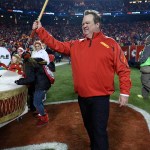 The Kansas City Chiefs will take on the Tampa Bay Buccaneers in Super Bowl LV, and they’ll have some big celebrity names cheering them on!

The 2021 Super Bowl will go down between the Kansas City Chiefs and the Tampa Bay Buccaneers on Feb. 7. This is the second year in a row that the Chiefs have made it into the big game. After winning in 2020, Patrick Mahomes and his team members are looking to run it back this time around. Once again, they’ll have some high-profile celebrities who will be rooting for them.

Brad Pitt grew up in Missouri, and even attended the University of Missouri for college, so he’s been a longtime fan of the Chiefs. In Jan. 2020, the actor attended the SAG Awards on the same day that the Chiefs played in the NFC Championship, and he showed his support by wearing a Chiefs hat while arriving on the red carpet. “My Chiefs won today,” Brad told Variety when he arrived to the award show. “I had to recover after my Saints lost. So I’m feeling a little better.”  He also gushed that the Chiefs were “on fire” during their playoff run.

Meanwhile, Paul Rudd may be the Chiefs’ most vocal celebrity fan. In 2007, he even narrated a documentary series, Hard Knocks, about the team! Paul was in attendance for the Chiefs’ AFC Championship win against the Tennessee Titans on Jan. 19, 2020. He got the crowd pumped up at the game by banging the team’s drum before kickoff, and was cheering like crazy in the crowd throughout the game.

Of course, the football season looked much different ahead of the 2021 Super Bowl. Most of the games this season only housed a limited number of fans due to the threat of the coronavirus. However, even without their celeb supporters in the audience, the Chiefs were able to take home a number of big wins and get to the Super Bowl.

Other celeb fans of the Chiefs include Jason Sudeikis, Henry Cavill and more. Click through the gallery above to see which stars will be cheering on the KC Chiefs in the 2020 Super Bowl!