After years of being one of Hollywood’s most notorious bachelors, George Clooney has settled down with his wife, Amal, and their two beautiful twin children.

George Clooney is the proud papa of two children — Alexander and Ella Clooney. The actor’s twins were born in 2017, less than three years into his marriage to his wife, Amal Clooney. George was 56 years old when he welcomed his baby boy and girl into the world, and he’s been a loving, hands-on dad ever since. There was quite a bit of time where George thought he might never become a father, but meeting Amal changed all of that.

For years, George Clooney was one of the most sought-after men in Hollywood. He was famously in a relationship with actress Kelly Preston for two years in the late 80s before marrying his first wife, Talia Balsam, in 1989. They were together for four years before splitting in 1993. In the years that followed, George dated a number of famous women, including Cameron Diaz, Renee Zellweger, Krista Allen, Linda Thompson, Elisabetta Canalis and Stacy Keibler. However, none of these gorgeous ladies were able to get him to settle down.

In September 2013, George attended a fundraiser, where he met Amal for the first time through a mutual friend. Despite their 17 year age difference, the two hit it off due to mutual interests. Right off the bat, Amal was very different than most of George’s famous exes — after all, she was a humanitarian rights lawyer, not a celebrity. Shortly after the pair’s first meeting, they sparked romance rumors when they were spotted out to dinner together. By April 2014, just six months later, they were engaged. 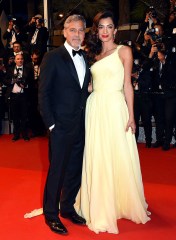 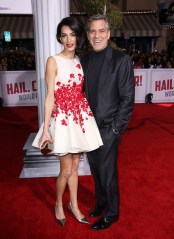 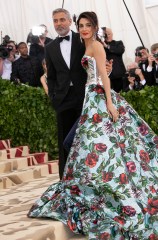 However, the proposal didn’t go exactly how George planned. In fact, he called it a “horrible moment,” because Amal was so not expecting the situation. When he led her to the engagement ring he had hidden, it actually took her quite some time to say yes. “She kept looking at the ring and looking at me,” George revealed. “We now know [how long it actually took] because there was a playlist — and it was 25 minutes! I finally said, ‘I hope the answer is yes, because I’m 52 and I could throw my hip out pretty soon.’ And she said ‘yes,’ so it worked out.”

George and Amal tied the knot on Sept. 27, 2014 at Ca’Farsetti, a palace in Italy. The wedding was a small affair, with only 105 guests in attendance. Before he married Amal, George was publicly pretty adamant that he would never be a married man again, but that obviously all changed when he met the gorgeous lawyer. “I was [always] like, ‘I’m never getting married, I’m not gonna have kids,”” George recalled to GQ in 2020. “‘I’m gonna work, I’ve got great friends, my life is full, I’m doing well.’ And I didn’t know how un-full it was until I met Amal. And then everything changed. And I was like, ‘Oh, actually, this has been a huge empty space.'”

For the most part, George and Amal are a fairly private couple. However, over the years, they’ve attended a number of high profile events together. From the Met Gala to the Golden Globe Awards and Cannes Film Festival, George and Amal have walked all of the most prestigious red carpets as a couple.

The most important moment of their relationship, though, happened in 2017. Amal gave birth to the pair’s twin children — daughter, Ella Clooney, and son, Alexander Clooney — on June 6, 2017. News of Amal’s pregnancy broke on a February 2017 episode of The Talk. Julie Chen shared the news with fans, and later explained, “My husband and I saw George and Amal almost three weeks ago and they casually mentioned that they were expecting twins. We were like, ‘Is it a secret?’ and George kind of went, ‘No.’ But we didn’t feel right telling anybody.”

Alexander is the older of the twins, as he was born minutes before his sister, Ella. Alexander was born at 12:54 p.m., while Ella arrived two minutes later, at 12:56 p.m. However, George recently revealed that Ella is the “more assertive” of the two. His mother-in-law, Baria Alamuddin, confirmed that to be the case. “She’s only two years old and she’s already the most powerful girl in the whole family,” Baria told HELLO! magazine. “She’s just determined and knows what she wants.”

Of course, finding out that he was having twins was quite a shock for George. “I was up for ONE,” he joked during a CBS This Morning interview. “I’m like, ‘I’m old!’ All of a sudden, it’s two, and I literally…it’s hard to get me to not talk, and I just stood there for, like, 10 minutes, just staring at this piece of paper. But I’m so glad they have each other.”

George and Amal have made a point to keep their children out of the public eye. They have not willingly shared photos of them, and they’ve done their best to shield Ella and Alexander’s faces from paparazzi cameras while out and about. However, George has opened up about the little ones in interviews on various occasions, so fans have gotten some insight into what their life is like.

In 2019, George revealed that Ella and Alexander were bilingual babies, despite just being two years old at the time. “They’ve obviously got my wife’s brains,” he told Ellen DeGeneres. “They’re not quite two, and they can count to 20 in English and Italian.” After the coronavirus pandemic in 2020, George also confirmed that Alexander suffers from asthma. He admitted that the Clooney family didn’t leave their spacious compound during the COVID lockdown due to Alexander’s health condition. “They say it’s not so bad on young people, but do we know that?” George wondered in an interview with The Guardian. “We don’t know anything about the longterm of this yet.”

Meanwhile, although George has said that having twins is a handful, he admitted that Ella and Alexander are “good kids” in a 2019 interview with the Today Show. “They really came out with the personalities that they’re born with,” he said. “They’re just completely different personalities, and they’re fun and smart. I mean, they can already do all their ABCs in Italian and English!” However, he told W magazine in 2021 that the “kids are slobs,” which has him doing laundry and dishes more often than ever before.

Even though George was in his 50s when he became a father, he recently admitted that he wouldn’t have had it any other way. “I found the right person to have them with,” he said on the Today Show in March 2021. He added, “There are some people, their goal was [to have children]. Mine wasn’t. I wasn’t looking at life going, ‘My life will be unfulfilled without children.’ I felt like I had a pretty full life. Then I met Amal and I realized that my life had been pretty empty. And when you throw these two kids in there, suddenly you realize how incredibly empty it was.”

Will George & Amal Have More Kids?

In July 2021, it was reported by a tabloid magazine that George and Amal were expecting their third child together. However, their representative shut down the rumors, confirming that the speculation is “not true.” George and Amal have not publicly revealed whether or not they plan to have more children, but a source previously told Us Weekly that it’s a “never say never situation.”

Either way, the two are clearly happy with where they’re at, with their two adorable bundles of joy. “There is no question that having Amal in my life changed everything for me,” George previously gushed. “It was the first time that everything she did and everything about her was infinitely more important than anything about me. And then we had these two knuckleheads. It is very fulfilling and something I didn’t see coming.”