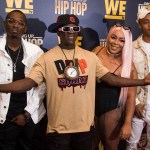 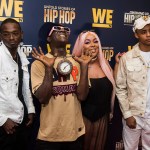 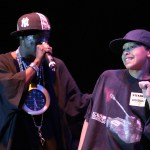 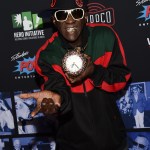 Flavor Flav is well known for his rap career, foray into reality TV, and iconic ‘yeah boy!’ catchphrase. He also has seven beloved children. Find out more about them here.

Flavor Flav, 61, née William Jonathan Drayton Jr., is best known for his time as a rapper and hype man in the group Public Enemy, a hip hop duo he co-founded in the ’80s with he and his friend Carlton Ridenhour, aka “Chuck D.” In addition to fighting the power, Flav went on to star in several Vh1 reality series, including The Surreal Life, Strange Life, and Flavor of Love.

Although Flav has had his ups and downs with the law and his share of family drama, he’s been able to build better relationships with his seven children he shares with three different women.

Me and my 7 children-Quanah-William-Shanique-Da'Zyna-Kayla-Karren-karma all Drayton's & I'm proud of every last one pic.twitter.com/Gns69JfYUu

Me and my doughter's from left to right Karren Drayton Kayla Drayton Da'Zyna Drayton Shanique Drayton at mom house pic.twitter.com/RmIvw9pH1b

Shanique, Karren, and Karla are the children Flav shares with ex Karen Ross, whom he dated in the late ’80s and early ’90s. The couple faced many challenges during their time together, as Flav plead guilty to assaulting her in 1991. He subsequently spent 30 days in jail and lost custody of his children. Following the incident, Flav’s family also staged an intervention after domestic violence and numerous drug charges were filed against him. Since then, Flav had various child support issues, often refusing to pay, but he has made an effort to be a bigger presence in his girls’ lives, posting numerous pictures with them on social media.

Da’Zyna, born Feb. 23, 1992, is Flav’s child he shares with Angie Parker, who he dated after Karen. According to Da’Zyna’s very active Instagram, she and her dad remain in each others’ good graces, posting numerous photos together. The two faced their difficulties back during the first season of Growing Up Hip Hop: New York when Da’Zyna confronted her father over his years of neglect/not paying child support for her growing up. “I know I’m all over the place, but I’m still that phone call away,” Flav said, per The Source.

“Growing up was hard,” Da’Zyna said. “It was very hard. It was not fun half the time. I had to deal with bullies and fighting. I had bumps and bruises. You not being there and stuff…it was a lot.” She went on to tell her dad she was homeless at one point and explained how “hard” the situation was for her. Flav clearly took in the message, wiping tears from his eyes and seemingly spending a lot more time with his daughter since then.

Like his sister, Quanah has also appeared on Growing Up Hip Hop: New York with his dad, and seems to be unafraid to step out in the spotlight. “I’m used to having them on TV with me, but now I get to be on TV with them,” Flav said during a panel for the show in 2019, speaking highly of his kids.

According to Quanah’s Facebook, he’s also interested in following in his dad’s footsteps, noting in his bio that he’s an “artist,” adding a microphone and music notes emojis.

William, Flav’s other son he shares with Angie, likes to keep things pretty low-key in his life, although he also appeared on Growing Up Hip Hop: New York with his siblings. Angie, like Karen, denounced Flav for neglecting his children, taking issue with the rapper refusing to pay child support. She also approached the court in 2014 for Flav to pay more than $111,186 in child support — an amount that had accrued over some time.

Karma is Flav’s child he shares with his wife Liz Trujillo, whom he’s been with for quite some time. Flav and Liz have had their many ups and downs, as Liz announced on a 2013 episode of Couples Therapy that she wasn’t aware of Flav signing his dating show contracts for Flavor of Love Seasons 1 and 2. They welcome their son Karma in 2007, and Flav has shared many sweet photos of he and his son to social media.

Jordan, who was born in 2019, is a child Flav shares with his former assistant, Kate Gammell. Kate filed a paternity suit in 2019 in the Los Angeles County courts and it was confirmed Flav is the father of the child. “Jordan is not getting any child support from Flavor, and I needed money for Jordan’s everyday needs,” Kate shared in an interview with HipHopDx in 2019. “So, I decided to pull out the merch and sell it to help my son and give a percentage to Children’s Hospital.”